Occasionally I’ll be hanging around on the internet with other folks who are interested in skinare and beauty, and one of them will mention something in that “Hey look at this weird thing” way, and it catches my attention.  One of the more recent things that fall into that category is the AdieuAge Ice Cream line.  Someone posted a link in a chat and was like “I wonder what this is?” and I thought to myself, “Yeah! I wonder what that is? I bet it smells good!” and then… things happened.  And by things, I mean an Avecko purchase.  Whoops.

The ice cream (I just love calling it that) comes in a heavy glass jar, which I think is kind of classy and nice.  A spatula is included for those of you who are concerned about hygeine issues with jar products. (I’m not… but I love tiny spatulas.) 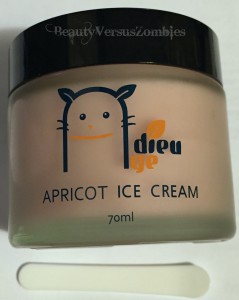 The AdieuAge Ice Cream can be used as either a sleeping pack or a cream. The texture is not unlike a cleansing balm – it looks like a lump of kind of an oddly grainy cream in the jar. There are little bumps in the product that I assume are extra bits of oil, which melt upon contact with the skin. 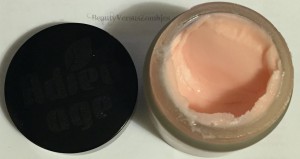 Then you apply it to your skin, like so. 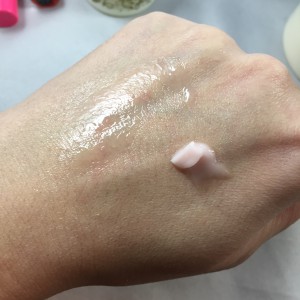 This is kind of a oil-in-cream, almost?  Like the cream version of a cleansing balm.  It starts out as a solid, thick cream, and then as you apply it to your skin it just melts into a more oily version of itself. The amount of product pictured on my hand above here is generally the amount I would use to cover my entire face – a little bit of this stuff goes a really long way.

Right after application, your skin looks kind of oily.  But after you let it sit for a bit on your skin, everything sinks in.  The Apricot variety smells very foody and sweet, and the scent does linger on your skin for a while, but it will fade away after maybe 5 or 10 minutes – less if you’re applying other products on top that will dilute the scent.

If you have oily or even sort of combination skin, I would absolutely advise you to avoid the AdieuAge Ice Cream, at least in the Apricot variety (unless you’re only oily because your skin is dehydrated). This is legitimately too much for oily skin.  For that same reason, I can only use this product as part of my night-time routine when my skin is a little dehydrated – whether that’s from chemical exfoliation, part of a skin prescription, or if it’s just been really windy and dry out.  On the other hand, if you’re dry-skinned, this is a pretty good moisturizer and I find it fun to use.  It spreads so easily and really feels thick and hydrating.

Here is a list of ingredients, translated in my ham-fisted way from the original Korean:

There are some issues with this ingredient list as I run it through COSDNA: Benzoic Acid rates a 2 out of 5 as an acne trigger and a 3 out of 5 as an irritation trigger; Cetyl Alcohol rates a 2 out of 5 in both categories; and Butylene Glycol is a 1 out of 5 ranked acne trigger.  But what really concerns me are the entries for ceteareth-20 and ceteareth-12, both of which are not ranked as acne or irritation triggers but have red indicators in the “safety” column, something which I’ve only seen one other time. (That review isn’t up yet.  I’m still working on it.)  Having a big red marker in that column is frankly, a little scary.  Now, I’m not a cosmetic chemist (for that you want Stephen), so until I know a little more I think I may stop using this product.  I’ve found mixed reviews online about both the ceteareth ingredients, that seem to indicate overall that they aren’t bad if used on unbroken skin but may have other side effects. Of course, there are also articles telling me that it will give me cancer, and articles saying it’s totally fine.  None of them are particularly scientific looking, so I guess that’s a research project for later (or something to ask an expert about when I find one who isn’t busy).

I used Avecko’s buying service to get this from Memebox Korea, and I paid about $13.50 for it.  It comes in two other varieties, Acasia (which I think is supposed to be acacia, but I’m not sure) and Catnip.