My skin hates oil cleansers.  I’m not quite sure why – I’ve tried lots and lots of them, and they work fantastically when I’m cleaning up product swatches on my arms or spilled makeup on my hands, but as soon as they end up on my face my skin screams NO.  Luckily for me, straight up cleansing oils are not the only option for starting a dual cleansing routine.  There are also cleansing balms: basically solidified cleansing oils that melt on contact with your skin, and then wash away clean with water.

I found cleansing balms fairly quickly once I started double-cleansing, and the only one I used for a significant period of time was the Banila Co. Clean It Zero original version, which comes in a plastic tub with an included tiny spatula. 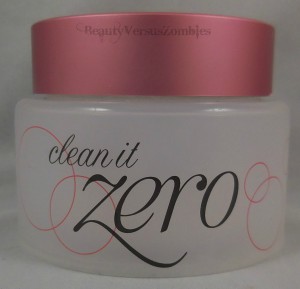 The Clean it Zero has a vaguely artificial sweet smell.  It’s not particularly soft when it’s in its more solidified form, so when you first use the spatula to scoop out some product, it’s a little more difficult than you’d anticipate.  Think of butter that’s been in the fridge awhile as opposed to butter that’s been on the dinner table while you eat. It’s not hard, per se, but it’s not particularly malleable.  I think that it does a really good job at getting everything off my face at the end of the day without being offensive to my skin, which is really all I’m looking for this sort of product to do.

It took me a good long while to move on from the Clean It Zero to try other things, partially because it did a fantastic job at removing my makeup.  I never stepped out of the shower with streaks of eyeliner down my cheeks; never felt like my sunscreen was still on my skin; never had to sit at my vanity afterwards and go in with another remover to get everything it missed.  If it ain’t broke, why fix it?  Of course, the fact that it was comparatively inexpensive certainly didn’t hurt anything either.  Banila also makes other varieties of the Clean It Zero balm:  the purity version for folks with sensitive skin or allergies, the radiance version for folks who want a brightening effect (although I have my doubts about how well a cleanser will actually do that for you) and the “resveratrol” version for anti-aging (again, not sure how effective a cleanser that’s not on your face for a long period of time will be at this).

Of course, what’s life without friends who urge you to try new things?  So my next adventure was the Skin Saver Melting Cleansing Balm from Su:m37, a much higher-end Korean brand. 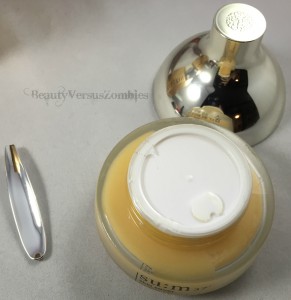 This bottle is straight up luxury.  It’s thick, heavy glass, it’s got a shiny top, and the top of the lid is magnetized so the little spatula sticks right to it!  Never lose your spatula again. Wheeee!

So this cleansing balm, aside from having packaging that is so much prettier than the Banila, is also less solid. Since I went with a butter metaphor before, this is butter that’s been on the table during the appetizer course and is now kind of soft and pleasant.  This product is hugely fragranced, though, and I know that’s a turn-off for some of you.  It’s very citrusy – enough that I was kind of taken aback when I first opened the jar up, and I love citrus scents. So it’s really pretty strong.

It does a good job of getting off all my makeup and is easier to use than the Banila.  It spreads more evenly, tugs a little less on your skin (not that the Banila is bad about that per se, but, you know, warm butter vs. cold butter), and is generally softer all around. It definitely feels more like a treat than something you ought to be doing as part of your cleansing routine.

Eventually I was like “I gueeeeeessss I could give other stuff a try”, and since I was in a Sephora anyway (no I wasn’t… whatever.  My mind is always in a Sephora) I picked up Erborian’s Solid Cleansing Oil.

This cleansing balm comes in a plastic jar, with a spatula included. (I love that these products include spatulas. I live for tiny included spatulas.)  It has that “I’m in a spa” scent that doesn’t necessarily smell like anything in particular so much as the general idea of both herbs and money.

If the Banila balm is butter fresh from the fridge, and the Su:m37 is butter that’s been out a while, the Erborian is butter that you accidentally stuck in the freezer for a couple minutes while you weren’t paying attention, then set on the counter to thaw out.  It’s not unworkable, and it’s actually not bad, but it’s not as pliable as the Su:m37 or even the Banila.  It’s the top layer that’s the hardest, which I suppose is not surprising given that that’s the bit that has been exposed to air; once you get past the top layer it’s only a little harder than the Banila.

The real shame about this product is that it states right on the side of the jar to avoid using it near your eyes.  Now, you may not wear makeup in the same way that I do, but I find that a makeup removing product that is unusable on the third or so of my face that literally contains the most makeup is basically a waste of my time and money.  What Erborian is asking me to do is buy their product, use it on 2/3 of my face, and then buy another product and use that on my eyes.  As the meme goes, ain’t nobody got time for that.  If I’m shelling out the cash for a cleansing product I expect to be able to cleanse my whole face with it if I want to.  So right off the bat, for me this is basically a dud.

I also didn’t feel like it did quite as good a job at cleaning everything off as the other two balms did, which is unsurprising to me given how much more product I seemed to need to cover my face and how much less the product itself seemed to spread as it melted. It absolutely did melt as advertised, I just felt like I got a lot more cleanser out of the same amount of starting product from the Su:m37 and the Banila balms.

So as a final test, I put three products on my arm and then used the cleansers to remove them. 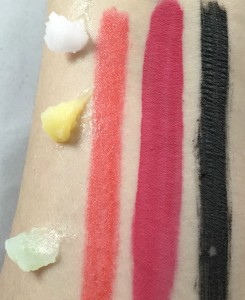 Furthest left is a Play101 pencil from Etude House.  In the middle is a Lip Manicure from RiRe, and on the right is Dior’s DiorShow Extase mascara.  I used a little more than a pea-sized amount of each cleanser and went to town on the dry skin to see how well they removed products.

Then I washed my arm with water, and scrubbed a little. 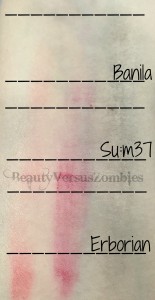 As you can see, the Banila seemed to do the best job, followed closely by the Su:m37, with the Erborian trailing behind.  I purposefully picked items that were more difficult to remove – the mascara itself was pretty clumpy and stubborn (I actually threw the tube out after finishing up this test), the Play101 pencils are designed to stain, and the RiRe lip manicure is supposed to be long-lasting as well.

So what’s the conclusion?  I like the Su:m37 cleanser a lot – it feels like a luxury, so what I’m likely to do is save the rest of what’s in my jar for days when I feel like I need a treat, and continue buying the Banila balm for everyday, since it’s significantly cheaper and does the job just as well.  If you have sensitive skin that really doesn’t react well to tugging or massage, you will like the Su:m37 better than the Banila, and it will be worth it to spend the extra money for a product that glides on smoothly enough that you avoid any contact issues.

The Erborian, frankly, I wouldn’t recommend at all, unless you a) don’t wear eye makeup, b) have the extra cash to spend on a more expensive product that doesn’t work as well, and c) have skin of steel.

The Banila Co. Clean It Zero can be purchased on Amazon prime for about $16.50, on SokoGlam for $21, on Peach&Lily for $16, and on KoreaDepart for $19.  It contains 100mL of product, which works out to an average of $0.18 per mL.  The other varieties can be a little more expensive, but nowhere near the price points of the other two balms.

The Su:m37 Skin Saver Melting Cleansing Balm can be purchased on Amazon for $40, at TesterKorea for $38, and at Koreadepart for $36.  It contains 100mL of product, which works out to an average of $0.38 per mL.