I am a fan of eyeliner.  I love subtle tightlining, sexy winged liner, and bold, graphic liner.  There are lots of ways you can line your eyes, and lots of different types of liner.  If you’re looking to get into something other than a pencil liner, but you aren’t sure you are confident enough to use a liquid or gel liner that requires a brush, a pen-style liquid liner is a good intermediate step.  I personally use a pen-style liner when I’m running late (usually before work – I am not a morning person) because I find a pen is easier to work with quickly.  Here are four pen liners I’ve used (with a note about a fifth), and my thoughts on all of them.

Lancome’s Artliner is a black pen that screws into a cap containing the liner fluid – like a fountain pen and an inkwell.  The body of both pen and cap are black, with gold lettering and detail.

The most flexible of all the pen liners I’ve tried, Lancome’s Artliner is also the only one that dries a flat, matte black, with no shine at all.

The Artliner’s pen is the thinnest of these four, which is one of the reasons it’s so flexible.

The down side to the really flexible brush is, of course, that it’s a lot harder to do precision work with the tip of the brush to get a really fine line.  You have to be pretty decent at lining in order to get a non-wobbly result with this brush. 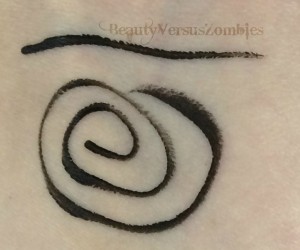 See how I ended up with differing thicknesses while trying to draw that spiral?  I didn’t press really hard with the pen or anything – the tip is just so flexible that it bends with even slight pressure.

This product is also not waterproof – if you rub your eyes with damp fingertips, you are going to end up with a mess. If you don’t have watery eyes, don’t rub your eyes, or don’t ever go out into the rain, then you’re likely not going to have a problem with it, but it is something to keep in mind.

Pick this product if:

You can purchase the Artliner at Sephora (they only have two colors for sale online last I checked), or at Clinique counters in Nordstrom’s, Macy’s, Bloomingdale’s, or Saks – or shop directly from their website.  The Artliner costs $30.50.

Something to be aware of:  many people consider L’Oreal’s Lineur Intense to be a very close dupe of the Artliner, for a much more affordable price (think around $8 instead of around $30).  I’ve used both and didn’t notice a whole lot of difference between the two. The only exception is that the Artliner comes in a larger variety of colors; the Lineur Intense comes in black, carbon, and brown.  The L’Oreal can be purchased at Target, Wal-Mart, CVS, Walgreens, and directly from L’Oreal as well.

This is a Korean liner that I got in a Memebox a while back.  It’s a basic black pen with white lettering on the case.

The pen tip is tapered to a sharp point.

I have to say, when I first got this pen I was like “Meh, I’ve already got a pen style liner, maybe I should give this to someone else who might love it.”  Then I ended up opening it anyway, just to see what it was like.  I’m glad I did, because if I had actually given this as a gift to someone I would have been embarrassed.  This pen is awful.  There’s no opacity to it, so I basically ended up looking like I might have had black eyeliner on – a couple days ago.  And then I forgot to wash it off, so it just slowly wore away.

And after a splash of water. 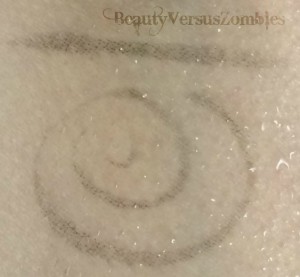 This is the point where I’d say “Pick this liner if:”, but I really can’t think of a reason to buy it.

Clio’s Kill Black liner range encompasses a brush liner, a pencil liner, and a pen liner. The pen liner packaging is a basic pen, charcoal-on-black, with silver lettering (with a font that is much more aesthetically pleasing than Shara Shara’s, by the way).

The Kill Black pen tip is thinner and smaller than Shara Shara’s, but also tapers to a sharp point.

The Kill Black liner is the only liner that is actually waterproof.  It didn’t even start to think about moving until I scrubbed it with soap in the bathroom sink – and even then, it only faded around the edges a little.

Here’s how it applies dry.  There’s a subtle glossiness to it. 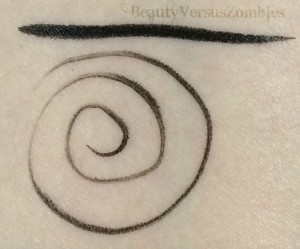 And after the judicious application of water (the liner-contaminated water is actually from the Artliner, which was above the Clio on my arm). 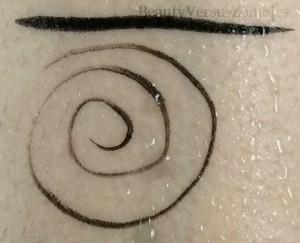 After I took these photos, I actually went and took a shower, and wasn’t paying attention so I didn’t use any cleanser on my arm.  When I got out of the shower quite a while later, this eyeliner was still there.  That’s tenacity.  It doesn’t hold up as well against oil, so if you have really oily lids you’ll need to be careful and maybe use a primer before you do your eye makeup.

Pick this liner if:

You can pick this liner up at KoreaDepart for about $14, Clio’s US site for $20, on eBay and Amazon. It comes in three colors: Kill Black, Kill Brown, and Kill Blood (burgundy).

Canmake’s brush tip is the thickest and firmest of all the pen liners I own – great for those days when you want the pen to do the heavy lifting for you.

This liner, like Clio’s, is very pigmented, and has that little bit of glossiness to it.  Not in a “holy cow look at the shine on your eyelids” way, but it’s not a matte product.  Here’s what it looks like right after application. 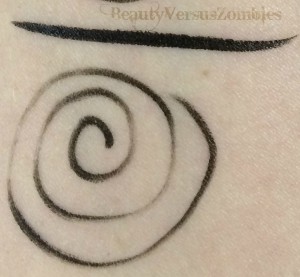 After a little water and some rubbing, the liner starts to come off.  It’s not waterproof, although it stays better than the Lancome for sure. 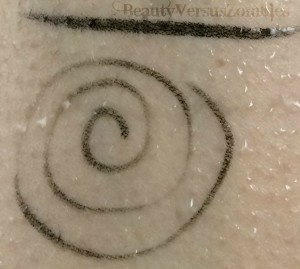 Pick this product if:

The Canmake liner can be purchased on Imomoko for around $14 (they’re currently out of stock), on Rakuten, on eBay, or on Amazon.

Personally, I use both the Canmake and the Clio liners, and I’ll likely repurchase each as well.  What’s your favorite pen liner – or do you use another type of liner altogether?