Call me a sucker for interesting looking lip products, but when I saw the ads for Etude House’s Snowy Dessert Holiday collection and the Pudding Tint pots that were part of it, I knew I had to grab them.   One of my favorite lip balms is the Vivito Painting Sweet balm, which is thick and gooey and just feels really protective, and I was hoping that these tints were going to be basically the same thing, only in a larger range of shades.  (The Vivito only comes in three colors.)

The Pudding Tint comes in a small jar, as you can see, and it is available in five colors, each of which is named for, and scented like, a particular fruit.  I purchased four out of the five colors because I am an incurable optimist and it rarely occurs to me that a product might suck when I’m purchasing things sight unseen online. (I passed on Lychee simply because of the color.)

They come in these cute little fold-up boxes that look a little bit like takeaway cake holders. 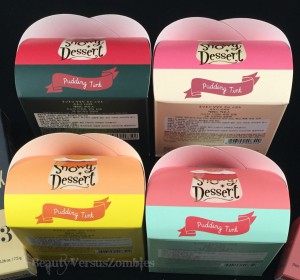 Then you unfold them and your tint is inside – just like a real treat from an expensive bakery! 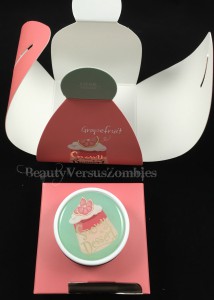 The little pots sit snugly in paper trays on the bottoms inside. 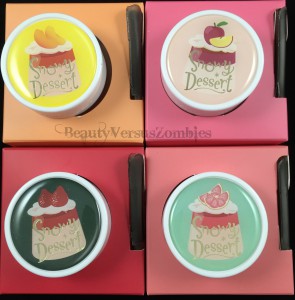 Each pot comes with a little applicator.  It’s in a little plastic sleeve, but it’s really just a plastic stick with a mini scoop on the end.

Here are some arm swatches of the colors (sorry they’re from light to dark, not numerical order). 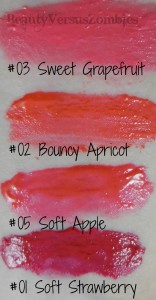 As you can see, these tints are pretty pigmented but you can sheer them out if you want to, which works pretty well for making a gradient lip as long as you’ve got some patience.

Here’s how they look on my lips:

The real trick when using these pudding tints is getting the quantity of product and the application right.  Too little product and it doesn’t spread evenly and looks a little patchy.  Too much product and it looks gooey and sloppy.  The difference between too much and too little is incredibly small – it’s hard to get the quantity correct. One of the things that makes it more difficult is how awkward the applicator is.  It’s too soft to apply precisely and too hard to be flexible enough to deal with the outlines of my lips.

The product itself is close enough to the Vivito balm (by which I mean jelly-like) that I’m happy to have spent the money on it, especially during the winter months – when you get the application right it’s cushy and comfortable to wear.  The darker tints stain more and faster than the lighter.  After about two hours, it does settle a little into the liplines, although it’s not super noticeable from afar.  I blotted to get rid of some of the issue, and that settled it nicely (I may be overapplying a little).  After four and a half hours or so, most of the cushiness was gone but the color was still at what I’d call about 80% strength, which I think is awesome, since it means I don’t have to stress a ton about reapplying during the work day, and it’ll keep my lips protected as I go to work in the cold mornings.  I actually put this on at night, left it for a couple hours, blotted it all away so that all that was left was the stain, and when I woke up the next morning, it was still at about 75%, so it really is pretty long lasting.  I’m impressed!

One caveat if you’re like me and you live in a really cold place: do not leave these in the car, or anyplace cold, for any significant period of time.  The package that had these tints in it arrived while I was at work on a relatively chilly day (probably around 10 degrees Fahrenheit, or -12 Celsius), and when I opened one up and put it on, it had the grossest texture to it.  It settled back down to what its consistency is supposed to be after it sat at room temperature for a while, but I can’t imagine that transition did anything good to the formula.

The Pudding Tint can be purchased on Etude House’s USA site for $10.40 each, although they don’t seem to have the Strawberry tint. You can also get them at YesStyle for $10.71 each, on Amazon for $15, on eBay for around $8, on ibuybeauti for $5.50, and on kpoptown for $7.10.  I got mine from TesterKorea for about $7 each, but they’re currently sold out.

I might also recommend picking up a lip brush.  Just saying.