While nobody could really say I’m particularly brand loyal when it comes to skincare or makeup products, I am extremely franchise-loyal.  I’m not one of those folks who started playing Final Fantasy on the early Nintendo consoles.  I actually started out with Final Fantasy X on the Playstation 2. (I know. You hate Tidus.  Trust me, everyone hates Tidus.)  But like Mario and Zelda, once I played a game in the series I was hooked.  I will in all likelihood continue buying Mario, Zelda, and Final Fantasy games until a) they stop making them b) they all reliably suck c) I die.  Whichever happens first.  I’ll be honest: I didn’t particularly enjoy the last two Fatal Frame games, and I will probably still buy the next one. (I won’t buy a console just for that though.  I learned my lesson with the Wii U.) So I happily took myself to Target and picked up a copy of Final Fantasy XV and started playing.

And then I kept playing.

And playing. My roommate began to think I would become permanently welded to the couch.

Finally, on Wednesday, I finished the game. So here are my thoughts. (All images in this post are screencaps I took throughout the game unless otherwise noted.) 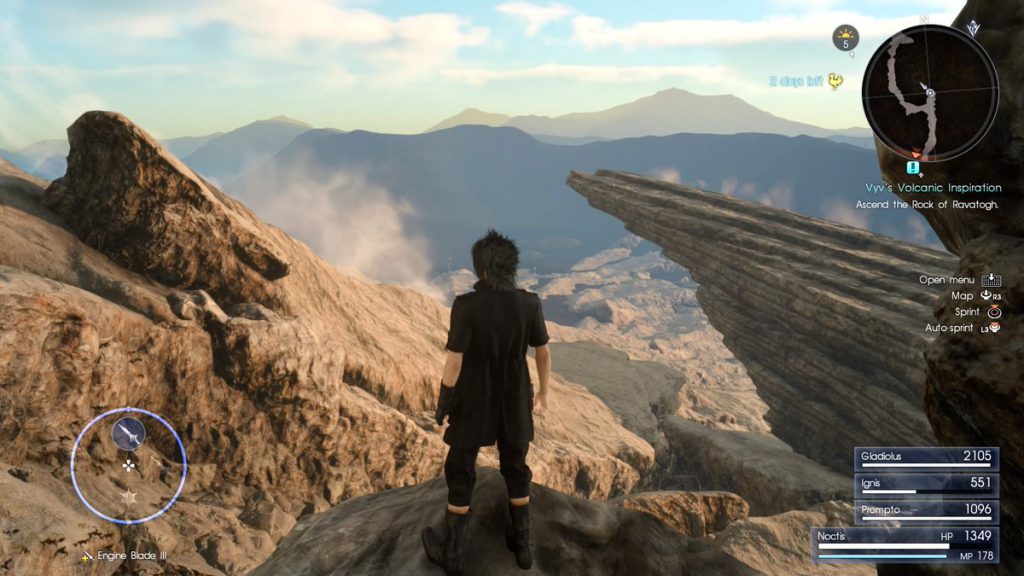 The environments are nicely rendered. 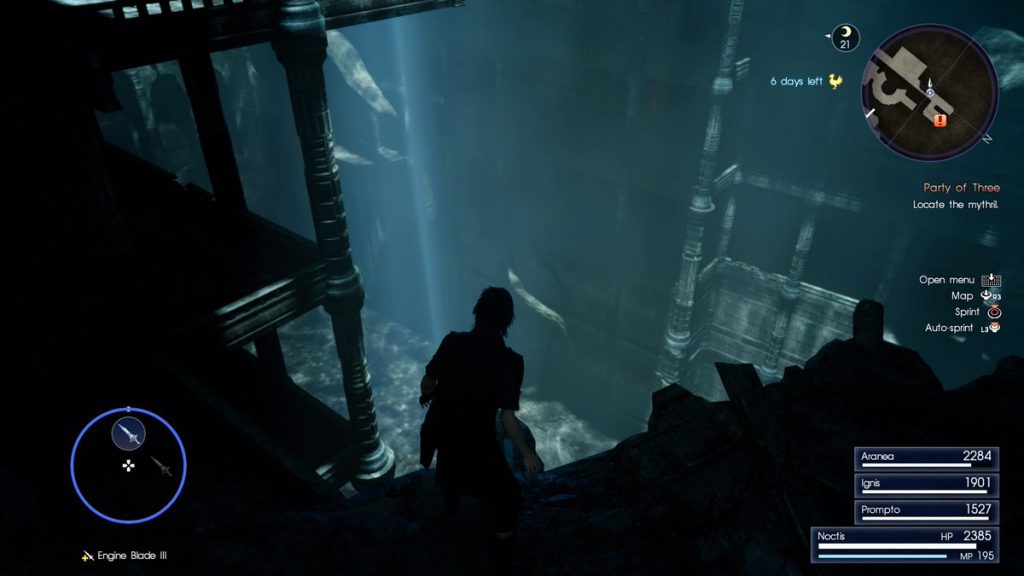 I found the real-time combat system to be fairly frustrating.  You get control over the camera and are expected to fight in real-time, without the traditional turns that have been in previous Final Fantasy games.  That in and of itself didn’t bother me so much, but I frequently found myself trying to fight in real-time while the game camera was hyperfocused on a plant that was between my vantage point and the fight Noctis was actually participating in.  Although you end up being able to use Summon spells (super late in the game), you can’t do it at will – the spells only work when they feel like it, based on a predetermined set of circumstances.

Magic use isn’t an innate ability in this game – all four of the characters can use magic spells, but Noctis has to create them.  There are some finer points to spellmaking, but basically you’ll end with a fire, blizzard, or lightning spell.  If you get crafty with it, you can add stuff to the spell (there are, for example, ingredients that hugely boost exp earned).  Spells are consumable items.  So Noctis will make three whatever-type spells. He or another party member will equip them.  The spell can be used three times, and then it’s gone forever (or until Noctis recreates it, using more resources). I found myself not particularly using magic much until the later levels of the game, because it seemed like such a waste (and I was always worried about running out of stored magical energy).

In terms of gear – I’m not great at collecting all the weapons or all the things in these games. So I generally end up fighting with kind of crap weapons.  But there are a number of extra weapons you can find.  Some of those weapons are upgradable. (You will need to find items hidden around the world, or that are quest rewards, to upgrade them fully.)  There are high-level weapons that you can purchase with Oracle Ascension coins, which are hidden all around the world and can only be redeemed at one vendor. (I didn’t realize that until after I beat the game and looked on the internet to figure out what the heck those coins were. Oh well.)  Your car is both upgradable (you can make it fly!) and customizable. There are the usual range of accessories that work for all the boys.

Plot-wise, though, I feel like it was kind of weak.

You play as Prince Noctis, the only (so far as I know) heir to the kingdom of Lucis. (If you know a little Latin, like me, you may find the names entertaining – Prince Night of the kingdom of Light. I see what you did there, Squenix.)  The game starts with you saying goodbye to your father as you and your three buddies (Gladiolus, Ignis, and Prompto) set out on a road trip to travel to meet your betrothed in the kingdom of Accordo and get hitched. Dad took a road trip with his buddies, too, way back in the day.

We don’t get much in the way of backstory, which is really what makes this game confusing.  In previous Final Fantasy games we started out in the middle as well, but what was going on was kind of filled in for us as the story progressed, so we got a sense of why everything was the way it was.  It didn’t happen so much for me in Final Fantasy XV, and it made me a lot less invested in the game.  Sure, I was able to put all the major pieces together, but I was left with a bunch of questions at the end. 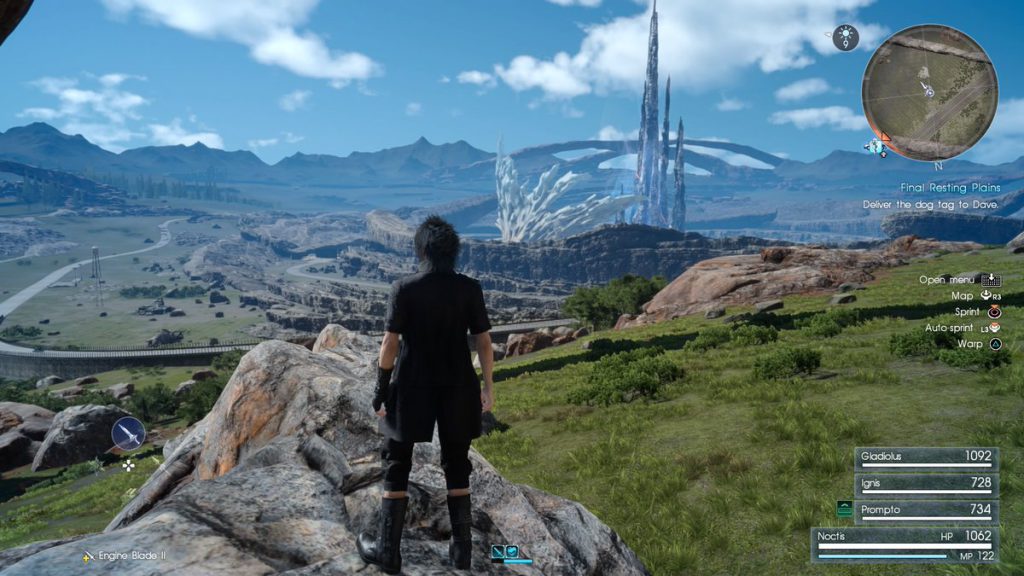 Regardless, this starts out as a road trip. Complete with that wierdo friend who won’t stop taking ridiculous pictures all the time.

Along the way, you can take contracts to hunt down monsters that are threatening the local population. 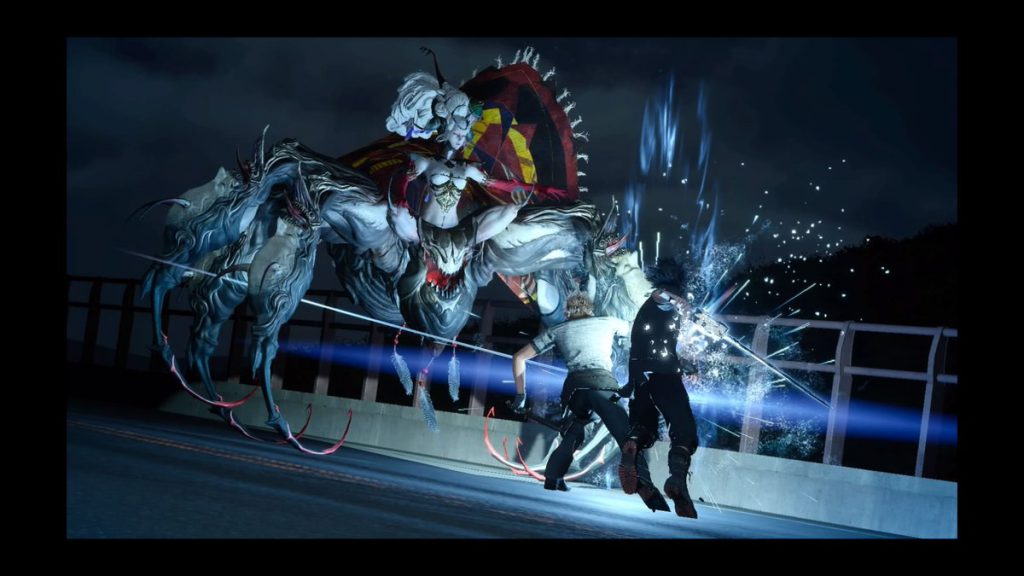 You can also do the usual sidequest chains – Person A needs something from City X. When you go to City X, Person B has the thing but can’t get it because of a monster.  Kill the monster, and Person B will give you the item to take back to Person A.  All of these sidequests give experience points and help your character level.

Each of the four main characters has a skill that can be developed.  Gladiolus’s is “survival”, by which the game means scavenging loot off dead bodies. You don’t need to actually develop that – it goes up on its own as your party walks around. Prompto’s is taking all those photos.  You will in fact actually get a set of photos that he’s taken every. single. time that you rest for the night. And it will ask you which photos you want to keep.  Other than that, no active effort is required on your part.

Ignis’ skill is cooking.  He will level up every time he cooks a meal for the group, which means that you will need to camp out rather than staying in a hotel, and you will need to scavenge or buy ingredients.  This is an actual useful skill, since Ignis’ cooked meals will provide stat boosts for your party for a short period of time. (You can level up how long it lasts.) 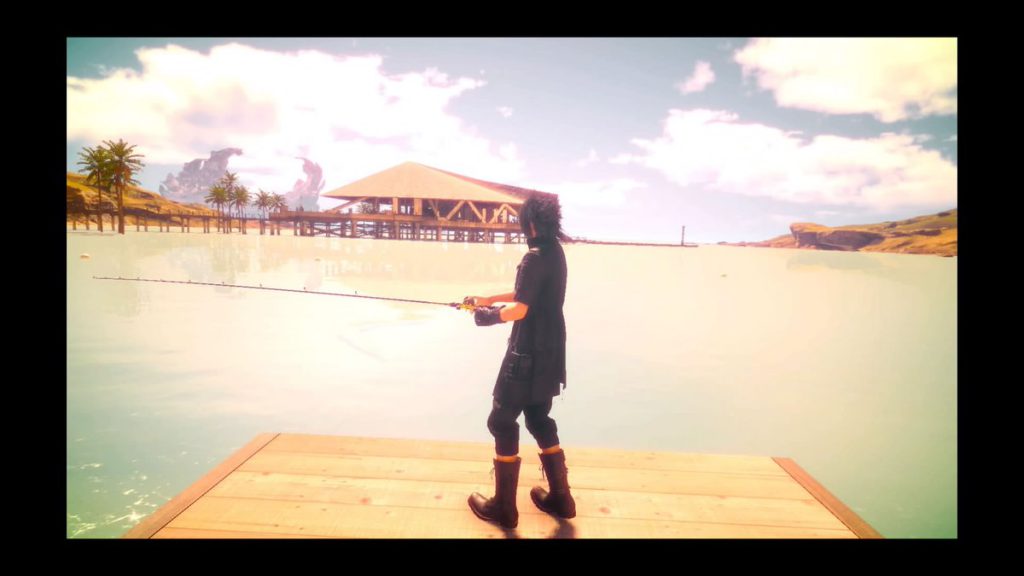 In case you wanted a little Zelda in your Final Fantasy, Noctis’ fishing skill is a mini-game.  It can provide you with experience and ‘ascension points’ (skill points) as well as with food ingredients and materials.

As for the plot, well – you go on a road trip, only to find out that the Empire attacked your kingdom’s Capital City and killed your Dad and took your Crystal and Ring which keeps the demons away.  It seems that the kingdom of Lucis was kind of the last bastion against the Empire, which is apparently staffed entirely by one dude, a bunch of robots, and a bunch of monsters, and them sniping all your stuff means the world is going to descend into total darkness and be overrun by demons.

That kinda sucks.  Guess the road trip is over.

So your fiancee, the Oracle, goes around trying to convince the gods to give you their blessing so you can go smack the crap out of that really unpleasant dude and take your stuff back. You have to go get the blessings from the gods (which sometimes also involves killing them or at least beating the snot out of them). At least one of them actually dies. Which begs the question, what is the half-life on the power of a dead god? How do you summon something that’s dead? None of that is really explained.

You communicate with your fiancee via notes in a book that is carried back and forth between you by a dog.

How does the dog know where you are? Or where she’ll be? I have no idea. Magic.  Also, why are you communicating like this when you both actually have cell phones? The world may never know.

The real world is actually a little too close in this game. Remember how I said earlier that Ignis cooks for the party when you camp out?  If he’s feeling really lazy, you can also choose to buy cup noodles.  They eat ramen in Final Fantasy XV. CUP RAMEN. Your fiancee’s wedding dress?  It’s a Vivienne Westwood.  Is that product placement?  What is happening here?

Also, the city of Altissia in the kindgom of Accordo.  It’s pretty much Venice.

Plot devices happen via cell phone calls while you’re out in the world. You’re driving a car, and you need to fill the gas tank or it will have to be towed. I don’t know about anyone else, but that’s a little too much reality in my Final Fantasy experience.  I found it really jarring.

Now, I won’t spoil the ending of the game for you, or even some of the more major plot points (where do monsters come from?), so here are my final thoughts on the game.

I watched the ending of the game and went, “…..Okay”.  That’s not generally the reaction I hope a game elicits from me. I played Final Fantasy Type-0 like four times and YOU KNOW HOW THAT GAME ENDS BEFORE YOU EVEN HIT THE INTRO LEVEL.

I think the game itself was fairly solid through the first half, and then the plot just got lost after that.  The world is so big, and there are tons of sidequests. While I absolutely love having the variety of choice, I found myself doing all sorts of sidequests because I didn’t want to accidentally leave out any plot while simultaneously feeling like I wasn’t making any progress.  Turns out I was right – I wasn’t actually making any progress, because there is just SO MUCH SIDEQUEST STUFF that you can spend literally hours and hours doing it while theoretically someone is in some city waiting for you to meet up with them and get things going again.  I suppose it’s this game’s version of what I think of the traditional Final Fantasy “grind” – doing missions and sidequests to boost your level so you don’t get immediately squashed later on.  I don’t think I finished any of the sidequest lines completely (some people will give you quest after quest ), so I can’t say whether you get something awesome at the end.  I will finish these questlines in post-game, and if I don’t get something amazing I will be so, so angry.

Is it a horrible game?  Not by any means.  It’s beautiful, the gameplay is interesting.  I don’t dislike the plot, although apparently there are movies or something that I should watch in order to actually understand the relationships between all these people and the state of politics in this world.  Am I upset at the price?  Not particularly – I got probably around 50 hours of gameplay in before I finished it, and there’s all sorts of stuff I didn’t do or didn’t finish that’s left for post-game play. But would I recommend people wait for a sale or a coupon to buy it? Probably.