The first Kingdom Hearts game was a PS2 release.  I’ve always enjoyed Disney films, and always loved video games, so naturally I got a copy and played it through a couple times.  I really enjoyed it. When the sequel was released, I bought and played it.  I remember being okay with it, although my memories of it are incredibly hazy.  I never brought it out and replayed it the way I would occasionally replay Kingdom Hearts 1, so the plot has kind of wandered out of my mind.  Some time later I also bought Chain of Memories, but I don’t think I ever made any substantial headway in it. I can’t remember why.

Regardless, when a friend reminded me a couple months ago that Kingdom Hearts 3 was set to be released at the end of January, I was excited.  I still like Disney movies (with some exceptions), and I certainly still love video games.  And after playing through Assassin’s Creed: Odyssey, I kind of wanted something that was a little less…how do I say it nicely… brain-oriented?

That didn’t really come out that nicely.  Oh well.  Moving on.

Anyway, I pre-ordered Kingdom Hearts 3 on my PS4, waited the day and a half for it to download, and got going.  Here are my thoughts (minor spoilers ahead).

The essential gameplay is almost exactly the same as the original Kingdom Hearts game. You, as Sora, go from world to world, solving all the Disney problems. There’s an overarching threat of darkness that in theory is tied into your journey as well, but each world is very self-contained, so the plot kind of gets lost while you’re rescuing damsels and foiling plots and all that. Just like all the other Kingdom Hearts games, you are accompanied by your faithful companions, Donald Duck and Goofy. 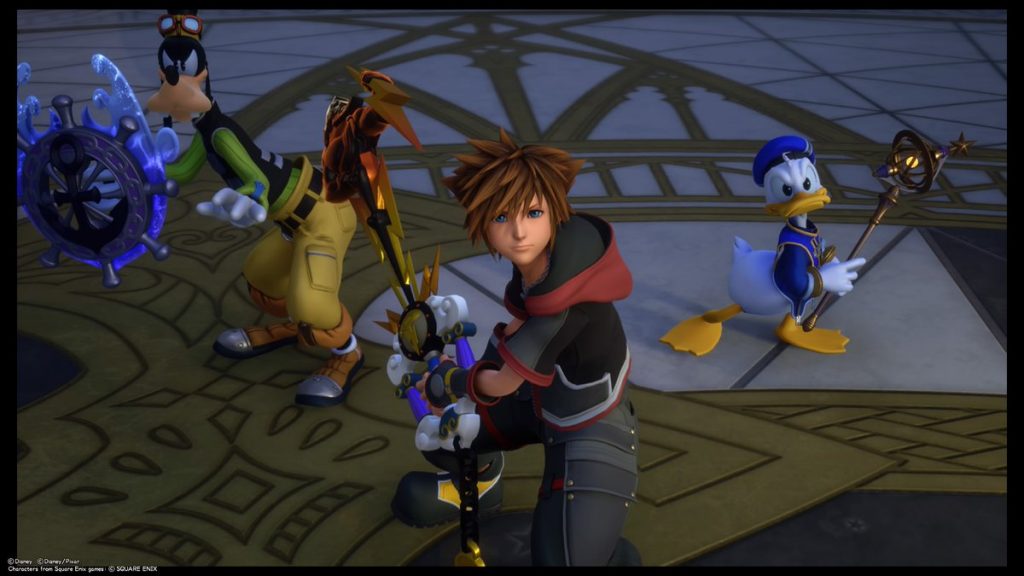 (Just a disclaimer: all of the pictures in this post are screengrabs from my playthrough of the game.)

Now, there are some games where I’m a loyal franchise devotee.  Silent Hill.  Fatal Frame.  Final Fantasy (although, to be honest, I haven’t played the early games in that series). Super Mario. Kingdom Hearts does not fall into that category.  By that, I mean that while I’ve replayed the first game several times and genuinely enjoy it, I didn’t replay the others often enough to remember what they were about.  And I didn’t replay them before I started Kingdom Hearts 3. That would prove to be my downfall.

You see, although I’ve got three other Kingdom Hearts games, there are actually like 10 games in the series.  And some of them were for handheld consoles, and I didn’t hear about other releases, or maybe I just didn’t care all that much. But it turns out that there’s been a really complicated and ridiculous amount of plot happening while I’ve been forgetting about this series, and not knowing it made all of the between-worlds “here is actual overarching plot” scenes really confusing, and to be frank, kind of boring.

If you’re in the same boat as I was, and you’re going to play the game, do yourself a favor and go read this article that at least attempts to explain what the hell is going on. I probably still wouldn’t have cared, but at least if I’d read this first I would have been less irritated. Also, there are little video plot recaps in the “memory archive” on the main menu. I didn’t find them particularly helpful – the article was way better.

Frankly, to me this isn’t really the kind of game you play for the plot so much as for the visuals, weird crossovers, and nostalgia. But that’s just how I play them; clearly there are folks out there who enjoy the plot elements. I just wanna be a mermaid, leave me alone!

(Spoiler: you do not get to be a mermaid in Kingdom Hearts 3.  I was sad.)

Okay, guys, I’m just going to come right out and say it: this game is great looking.  Yeah, it’s got that cartoony feel that you would expect from Kingdom Hearts, but they did not hold back on the artistry.

The environmental details carry through the overall large cutscenes (and there are a lot of those) into the smaller cutscenes introducing enemies as well. 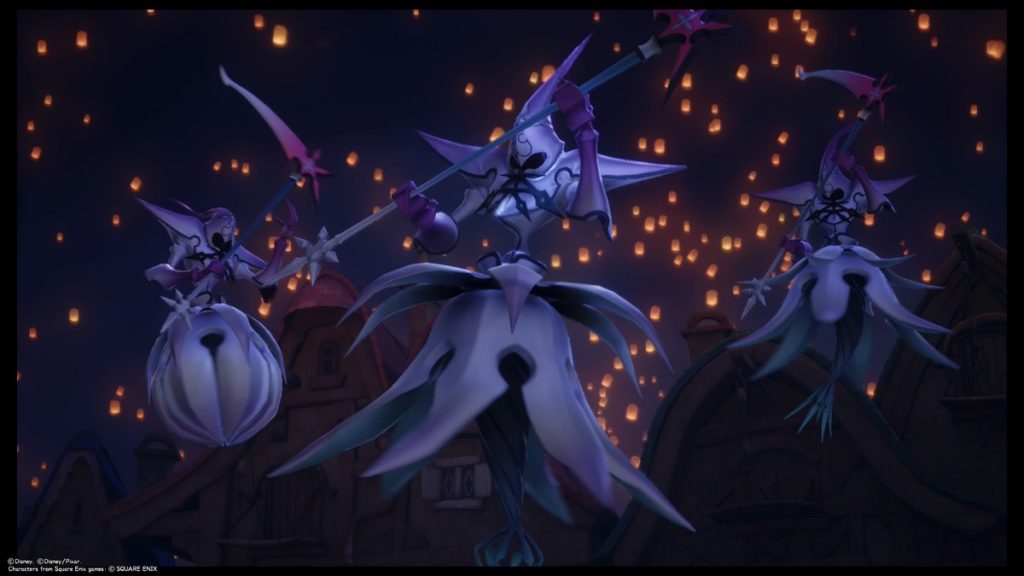 Then they translate over into the actual fight, at least in the background. Nice. 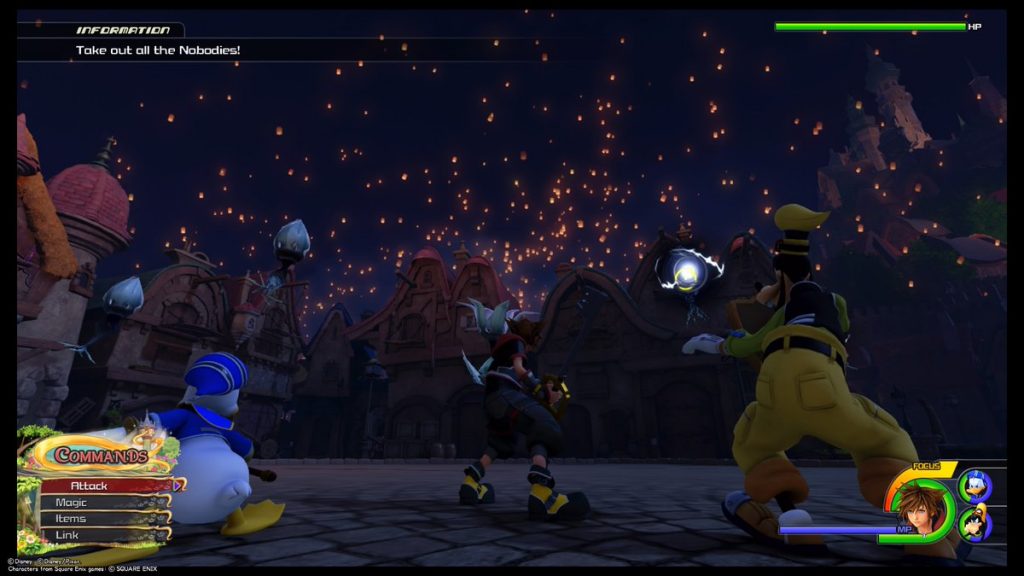 The game keeps a lot of the trusty old Kingdom Hearts mechanics, including the gummy ship. While traveling from world to world you can fight scripted battles, attempt to unlock treasure spheres for special loot, or just noodle around as you please.  I’ve never been big on building the gummy ship, even in KH1, but I will admit they give you a lot of fun ship plans.  You can even buy a puppy for your ship, if you want (and have the munny). 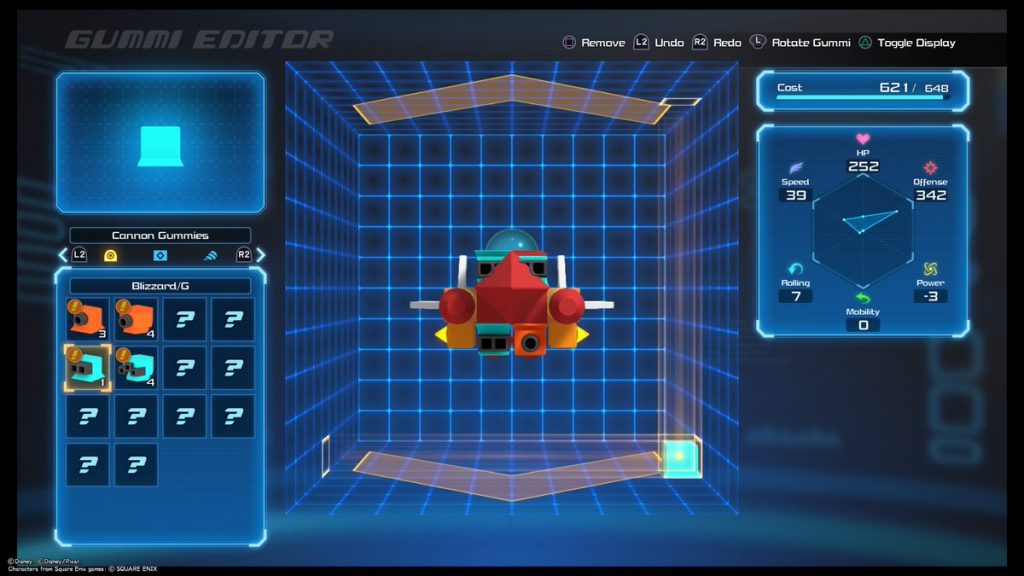 The interactions between our main trio and the movie characters are often charming as well.  My roommate and I were especially fond of Flynn Rider from Rapunzel, who decided that we were his “sidekicks”. 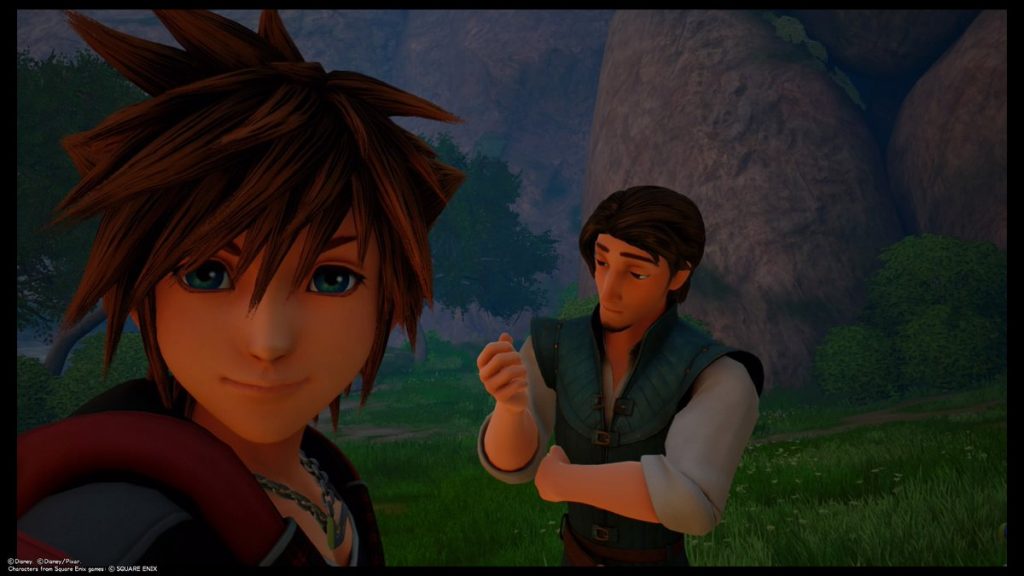 The selection of worlds where you can play is pretty great, although it veers mostly away from the “classic” Disney and stays more modern. 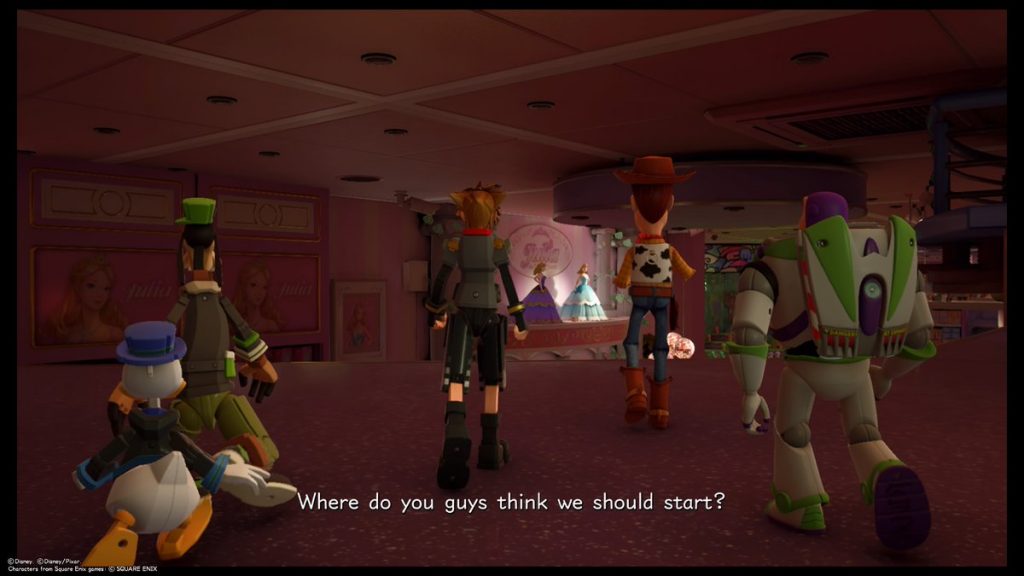 Obviously you can tell from the photos what some of the worlds are. 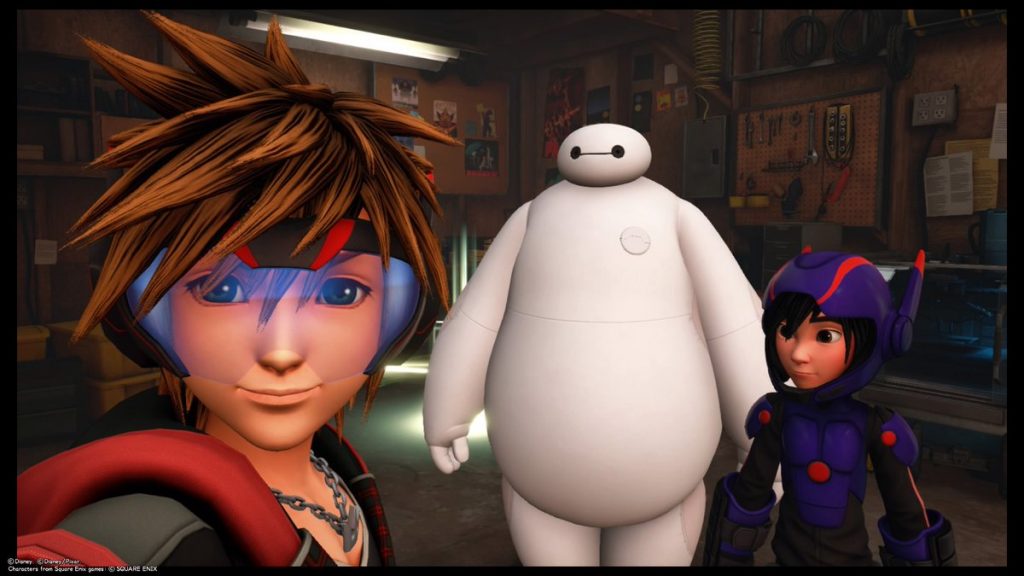 They also continue, as you can see, with the theme of transforming the characters so that they “match” the worlds that they adventure in, which leads to at least one fun new look. 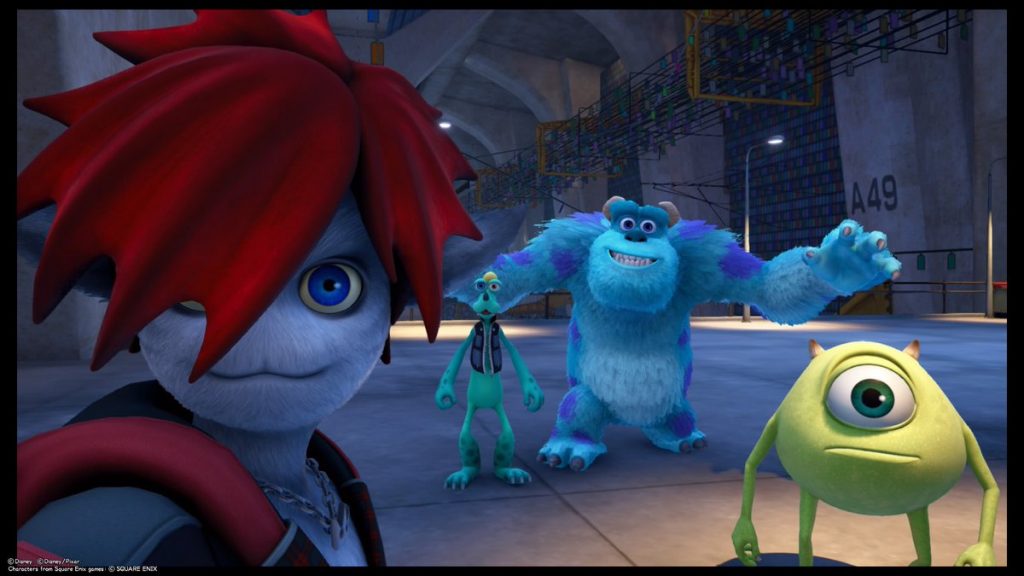 You can also occasionally find a sly joke as you’re playing.  Here’s one that pretty much sealed the deal for me.

Maybe it’s just that I’m jaded and awful (at least I admit it, right?), but this game honestly felt like it was written by a bunch of old people trying really hard to be relevant to a younger crowd. Example?

As you can see from some of my screenshots above, Sora is given a “gummiphone” during the game.  He can use it to take pictures of things for curious moogles. Or he can take endless selfies.

Or, he can use it to play all kinds of “classic minigames” that you find by checking posters for (I kid you not) QR codes to scan.  I’d show you a screenshot, but I literally did not play a single one of those phone minigames out of sheer spite. It is entirely possible that they are fun.  I was not interested.  I understand that the big trend now is to go for an open-world game where there are lots of possibilities for player-driven activity and exploration. This game is not a good vehicle for that mechanic, and putting all of these “extras” in almost feels like an attempt to distract the player from the fact that this is a very linear game.

There are two minigames in the game that are intertwined.  If you played Final Fantasy XV, you’ll remember that Ignis’s particular skill is cooking, and he creates recipes that provide the party with stat boosts.  That mechanic was included in Kingdom Hearts 3. 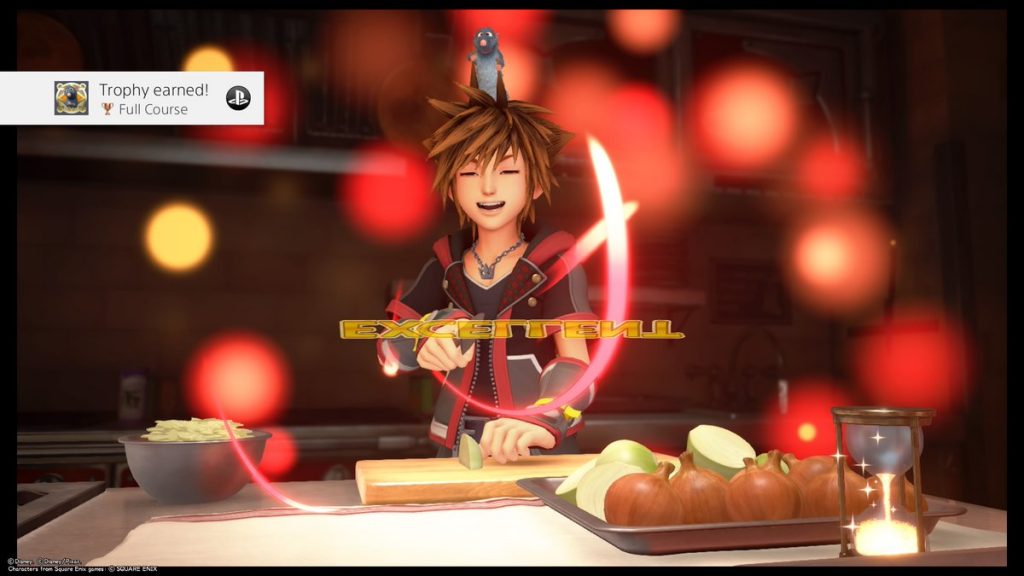 I was actually pretty okay with this minigame (I worked with it in FFXV as well), but it’s tied in with another set of minigames: the Flan games.

Seven giant flans hide among the worlds you visit, and you have to find each flan and beat its game to get a special ingredient.  You have to get multiple each of the special ingredients in order to complete all of the recipes. So you’re going to be playing these minigames a lot.  Some of them are kind of fun.

Some of them are…well. Anyway.

Both the cooking game and the flan game tie in with one of my other major complaints about this game: I found the controls to be fairly clunky. A chunk of that can probably be attributed to my own lack of finesse, and I’m fine with that.  But operating Sora with precision was not exactly an easy task. And that made both the minigames and the regular games very frustrating at times.

All Conversation And Less Action

While it’s fun to hop from world to world with Sora, Donald, and Goofy, you spend a lot of time watching instead of playing.  This game is chock-full of cut scenes. And there are whole sections that are basically just ripped from the movies in question.

There were several points where one cutscene would end, and I would start to try and do something or go somewhere and immediately get sucked into another cutscene.  Sure, not all of them were very lengthy, but I found it really frustrating to feel like I the game was constantly interrupting me.

No Moana. That’s it. That’s the whole complaint. WHY IS THERE NO MOANA.  And actually, while I’m on this thought process, what happened to all the Final Fantasy people?  Did they die? Did plot happen to them in the other games and nobody told me?

So I know that I just spent paragraphs and paragraphs ripping on this game, but I have to say that I still liked it.  I played it daily.  Literally. (My roommate will accept sympathy brownies.)  Is it worth full price? I don’t know that I’d go that far, whereas I would unequivocally have recommended the first Kingdom Hearts.  But it’s definitely worth a play just for the visuals and the fun world-hopping. 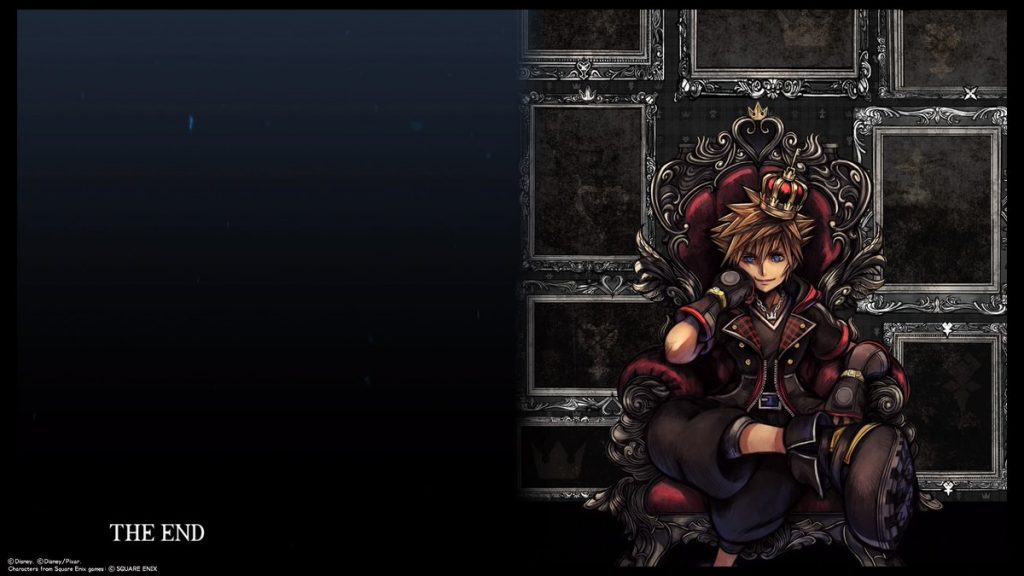