I’ve been on (what I’m going to call) an extended hiatus with this blog while I’ve been working through some life things in meatspace.  As you can celarly tell from the lack of updates here, I just haven’t had the wherewithal, emotionally, fiscally, or time-wise, to test new things and write horribly judgmental (and hopefully funny and entertaining) things about them.

That’s still the case.  I’m still working on real stuff.  But occasionally things just pop up that make me go “Oh hell, why not?”

By that, I mean that Colourpop had a sale.

I got the e-mail in my inbox and only kind of glanced at it – I keep a special e-mail for all my “shopping mailing list” stuff, and I only periodically look at it.  But for whatever reason, I clicked into Colourpop’s email.  And found that they were having an invite-only anniversary sale.  The idea was that if you bought a Super Shock eyeshadow, you would get one for free.

We’ll start with the EXO stuff, because I love EXO and also there’s more of it than the rest, which is tangentially related at best.

One disclaimer before we really get cranking: these are first impressions only.  I haven’t had lots of time to play around with these products, and some of them I definitely can’t wear to my “we are very conservative appearance-wise” job, so keep that in mind.

Yeah, they actually named a Super Shock eyeshadow EXO.  It’s described as a “warm-toned rosy pink with silver and hot pink glitter”.  The formula is an ultra-glitter finish.

Now, if I were forced to name an iconic EXO eyeshadow look, it would be this one, from the Seoul Music Awards.  You EXO-L makeup people already know what I’m talking about. 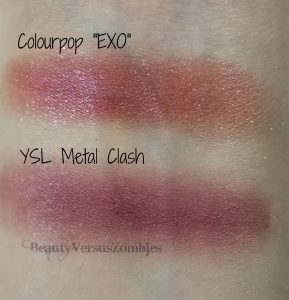 I will say, upon further inspection, that this is a lot less “pink” than it reads in the pan.  It’s different enough that I kind of wonder whether I could recreate Baekhyun’s look using this shadow.  I haven’t had the time to try it yet, but since I’m that kind of person (read: free on the weekends) it’s on the books as a project.  When I did my swatch testing with this shadow, it did stain my skin a little, although it came off pretty well with an oil cleanser.

(Just as a P.S., even though it’s clearly and obviously not a dupe, I absolutely would NOT recommend the Metal Clash palette to anyone. Just, you know, throwing it out there.)

Eve is listed as a “metallic warm brown” eyeshadow.  It’s a super shock shadow, and the formula type is listed as ultra-metallic.

Personally I think it’s got almost a greeny bronze tint to it.  This is a color that I’ve got plenty of similar colors to compare, at least.

I couldn’t tell from looking whether they actually based this shade on one of the makeup looks from the Eve promotions.  It’s very, very metallic, so if that’s a thing you hate you should avoid this, but if you’re willing to wear that finish I’d recommend this color.

Cloud Nine is not a Super Shock shadow, it’s just a regular pressed powder eyeshadow. The color is described as a “matte plummy brown”, which is pretty spot on. 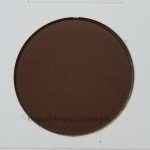 You can buy these pressed powders as just a pan, or as full shadows for a dollar more.  If you buy the full shadow you get a pan plus a little holder for it which you need to assemble yourself.  They’re fairly easy (and magnetized) but if you have a z-palette or some other kind of magnetic organizer I’d just buy the pan. No reason not to, really. 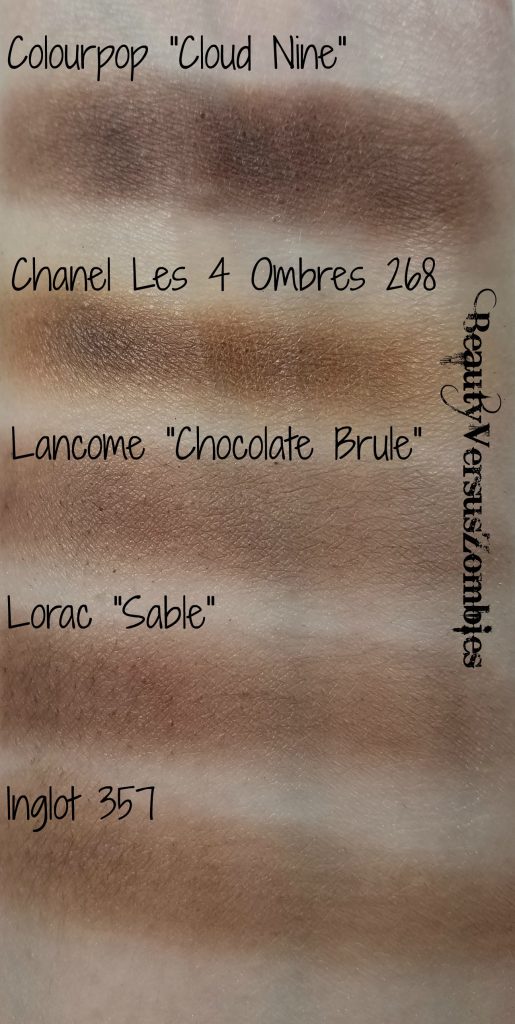 The real interesting thing about this color is that purpley undertone to it, which I had a difficult time matching in any of the brands I already own, which is odd because I keep a crap-ton of neutral eyeshadows around. I find that Colourpop’s pressed shadows are less pigmented and a little less easy to work with than their super shock shadows, but they’re still pretty good when compared to other shadows.

Monster is also not a super shock shadow.  In fact, it’s a super shock highlighter.  But I absolutely adored the concept for the Monster MV, I like the dance, and I love the song (even though the lyrics are disturbing AF).  So even though I really don’t dig highlighter and never use it myself, I bought it.  Commit to the movement.

The highlighter itself is described as “light pink with opalescent duochrome flip”. 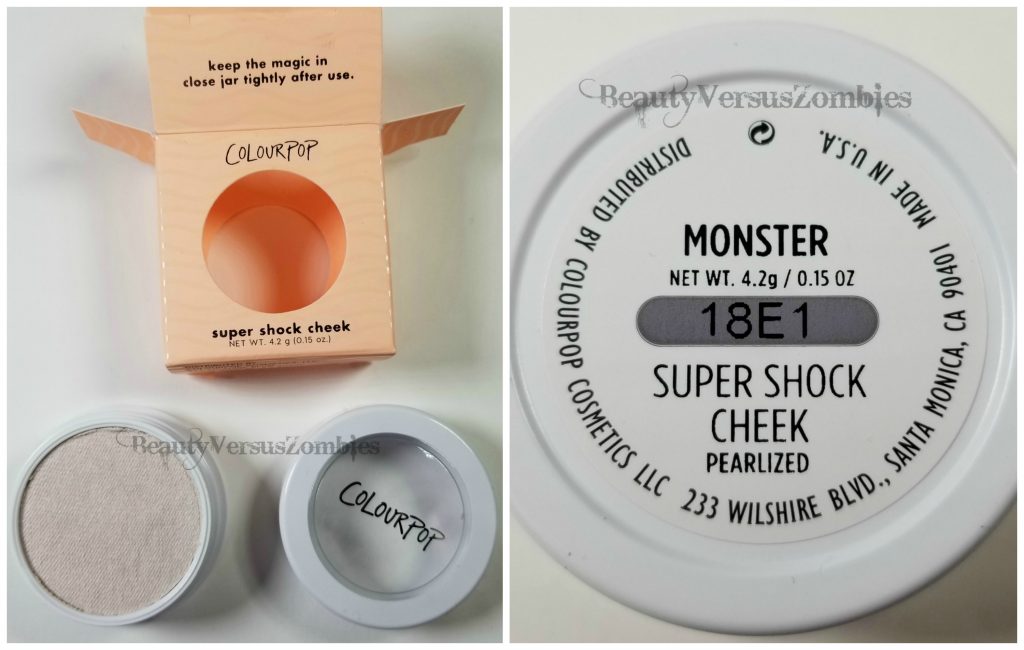 And it’s basically as described on the tin.  It is definitely pink.  Since highlighter is not really my jam, I’ve only got a couple swatches to compare it to, and none of them are really the same thing.  Whoops! (I do the best I can.)

The long and short of it is, this is super freaking pink and I will never wear it outside of like, Halloween or something.  I can’t really review it for quality because I have no idea how to highlight without looking like a disco ball drank a bottle of Goldschlager and threw up on me.

And now, onto the less-directly related stuff I bought.

So… this is another regular pan shadow that I bought.  I picked it up based on the title alone, because I really enjoyed Henry’s song of the same title, off his mini-album “Trap”. (Listen to it here. It’s super cute.)  “Intense matte deep lilac” is how Colourpop describes the shade. 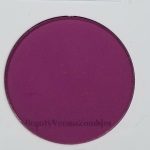 Like EXO above, I don’t really have much in the way of dupes for this color. 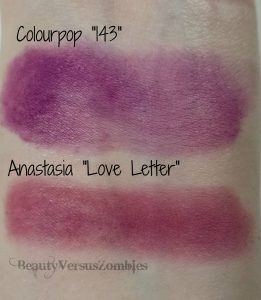 Unlike Cloud Nine, which I thought was pretty decent to work with (although not as creamy and insanely pigmented as the super shock shadows), I found this shadow to be kind of patchy, which didn’t make me really happy.  Also it stains like it knows you’re going to throw it away later and is preemptively getting revenge. I can’t say I’d recommend it.

I’m not really a Red Velvet fan.  I do like a couple of their songs – Red Flavor and Peek-a-Boo – but I don’t tend to listen to their discography.  I do, however, know that they had a song called Russian Roulette. 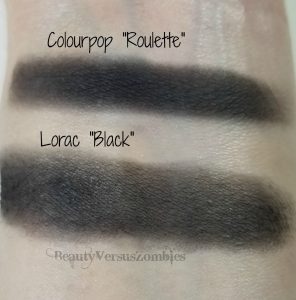 I consider Lorac shadows to be pretty great in terms of how soft they are and how easy they are to work with, but Roulette just totally blew Lorac’s black shadow out of the water in terms of pigmentation.  I can’t speak to how well it would work being blended with other colors, but if you need something to put over eyeliner to set it and you don’t want to dull it down, this is probably a really good bet for you. (Ha, see what I did there? Gambling? Russian roulette?  I’ll see myself out…)

So I was looking for another super shock shadow to round out the BOGO promo.  A couple of days earlier I’d been reading about SM removing the memorial shrine for SHINee’s Jonghyun, and I thought “you know, I don’t really have any makeup in SHINee’s official color of pearl aqua, and I kind of want some.”   So I scrolled through the colors to see if I could find one, and this is what I found. It’s described as a “soft pastel aqua” and is a matte finish.

Now, this is a cautionary tale of why not to shop for makeup at work, because it turns out I have plenty of eyeshadow in pearl aqua.  Whoops.  Oh well, no regrets.

This is a color where I personally think the fact that Colourpop shadows are so pigmented is a minus.  I’d be much more likely to wear any of the MAC shadows, because they’d be easier to use without the color overwhelming my face. (Also more likely to use the others because bling bling is Jonghyun. But that’s another matter altogether.)

I’m still sad that Jonghyun is gone, so here’s one of his performances for you.

So, here are my overall impressions:  these seem like pretty decent products for a cheap price point.  Are there some issues with them? Yeah, but for $5 I can certainly think of worse ways to spend some money than having some fun.

When I went to check out, I entered the coupon code and then didn’t confirm that it actually went through.  So I got exactly zero of the promised eyeshadows as BOGO. When I noticed, about ten minutes later, I e-mailed Colourpop and asked if they could honor the coupon retroactively.  They told me no.  I made a new cart and tried to use the coupon code again.  It still didn’t work.  So I’m a little unimpressed with how that went.

I’m a lot pickier about lip products than I am about eye products. So although there are two lipsticks that are EXO song titles (MAMA, an ultramatte orange liquid lipstick, & WHAT IF, a fuschia creme lux lipstick) and one SuperJunior (MAMACITA, a burgundy ultramatte liquid lipstick), I wasn’t willing to shell out any money for them.  If you are willing to, let me know how they are!

Colourpop’s website can be found here.  The eyeshadows were $5 apiece regardless of formulation.  The highlighter was $8.