I really like cushions.  Up to this point I had never purchased an Innisfree cushion for myself, but one of my friends online sent me  a refill of the Ampoule Intense cushion in some number I couldn’t determine.  The shade was actually a really good match and it quickly became my go-to cushion, as once I started wearing sunscreen regularly a lot of my cushions became either a little too dark or a little too orange.  As is the way of all things, as soon as I find a product I really really like, it gets discontinued.  The same thing happened here, because Innisfree took the opportunity to launch their “My Cushion” line.

The idea behind the Innisfree My Cushion line is that it’s completely customizable.  There are 100 outer compacts that you can pick from in different colors and patterns, three types of cushion formula, and two kinds of cushion puff.

I had originally intended to buy both a case and two different cushion formulations, but I ran into a hitch when the shop informed me that they were out of stock of no less than three of the color options that I would have been willing to buy.  So I figured I’d wait to see whether the cushion formula actually worked before I spent the money on a cushion case. I’m going to have to wait for delivery either way.

Anyway.  On to the comparisons.  The two Innisfree My Cushion formulas that I picked were the Water Fit Cushion and the Ampoule Moisture cushion.   Each cushion contains 14 grams of product, and I got each in the shade N21, Natural Beige.  The cushions also come in C13 Light Beige, C21 Pink Beige, and N23 True Beige.

I had heard on the Internet (but had no experience myself) that some of the different types of cushions were different colors – like a #21 in one formula may have been lighter or darker than the others.  That doesn’t seem to be the case here.  This is what they look like, with a MAC concealer for comparison. 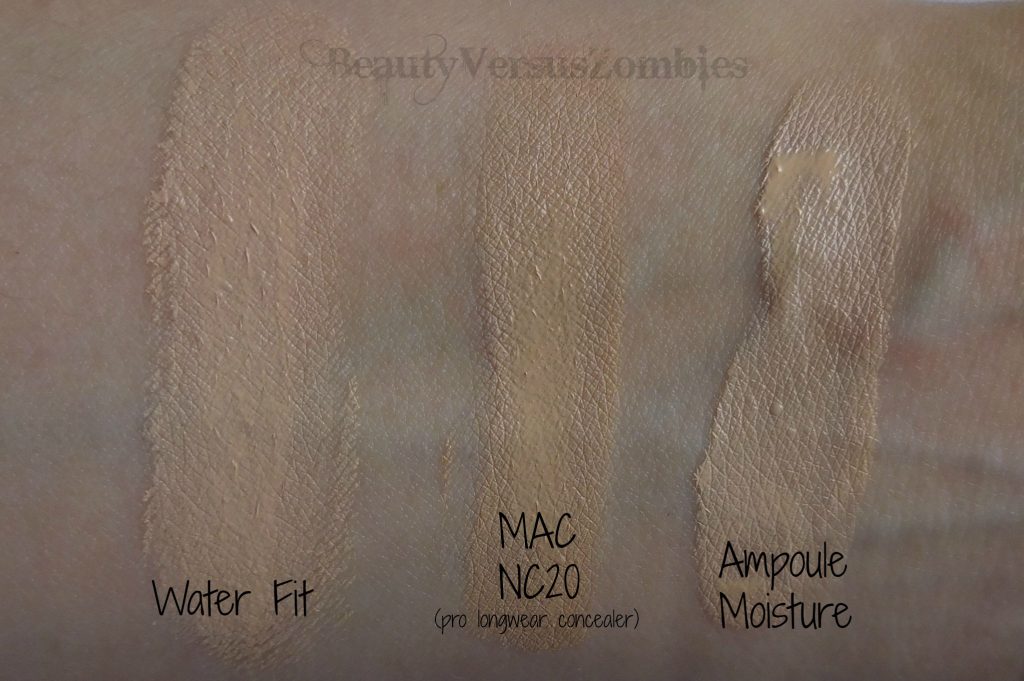 As you can see, the Ampoule Moisture cushion is more.. well, watery.  The Water Fit is a little thicker.  Here they are after being applied with a cushion puff (just a standard I’m Meme one, not an Innisfree puff).

The cushions themselves are sold separately, as refills – so you will have to pick from the list of 100 cases to have something to put the refill in, unless you want to carry it in a sandwich baggie in your purse.  They have a seal inside after you open them up, to ensure that they are sanitary and haven’t been tampered with.

Also handy is the fact that now each refill is labeled on the bottom with the type of cushion, the color, and the expiration date. 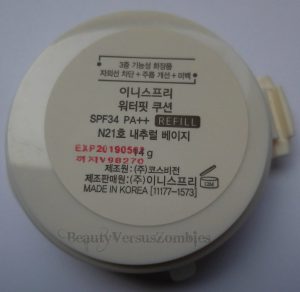 This is what the refills looked like before, which is why I can’t tell you what the color of my gifted refill is: 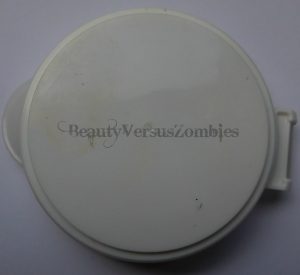 Not particularly helpful.  Kudos to Innisfree for labeling their refills this time around.

The Innisfree My Cushion Ampoule Moisture cushion formula is designed for folks with dry skin, and is supposed to provide light, natural coverage.  I personally felt like this cushion formula left a really oily slick on my face, and the cushion didn’t set really well on my face at all – when I touched my face afterwards the foundation would move, and transfer onto my fingertips.  Even on my post-tretinoin desert dry face it didn’t adhere well right away.  It definitely had that super dewy look to it, but not only is that not really a look that I’m going for in general but I have no use for a foundation that doesn’t actually stay on my face.  It does look really nice on my skin, though.

I will say that I absolutely cannot use this cushion on oily days.  I tested it for the first time on a day with high heat and humidity and it completely affected the way it wore – it did not react well with sweat or my own skin oil. 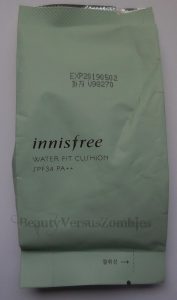 The Innisfree My Cushion Water Fit cushion formula is listed for folks who have combo-to-oily skin and is supposed to provide perfect, natural coverage.  This cushion formula still provides kind of a dewy look, but it’s a lot less oily and smudges less than the Ampoule Moisture cushion.  It still moves a little, which I guess I expect from foundations if I don’t set them.  I prefer the way that this product stays, although it doesn’t sit quite as nicely as the Ampoule Moisture cushion – it doesn’t exactly emphasize my pores, but it doesn’t minimize the look of them either. The coverage from this cushion type is a little higher than the Ampoule Moisture due to the thickness of the formula, but I would still call it light to medium.  It worked decently on both my dry and oily areas, although the oily parts did tend to get more of a dewy look than the dry ones.

Since we’ve looked at the differences between the two, let’s also look at similarities.  Both foundations made it over 4 hours without any creasing, flaking, or patchiness.  The Ampoule Moisture cushion calmed down a whole lot after about an hour or so – and I didn’t really need to correct for it being moved around on the skin after about that time either.  My skin didn’t feel dehydrated after using either cushion.  Both cushions also had the same amount of coverage – light to medium, with the Water Fit cushion being more buildable (the Ampoule Moisture cushion will only smear if you try to add more product on top).

Bonus Round: Innisfree My Cushion + Primer

Since especially the Ampoule Moisture Cushion moved around a whole lot on my skin, I was curious to see whether I could “fix” the issue by simply wearing a primer underneath – and if so, what kind of primer it should be.  And if the Ampoule cushion is getting that treatment, it would simply be unfair to not include the Water Fit. They’re like siblings, man, you can’t just leave one out. Or something.

Both cushions performed really well over the mattifying and smoothing primers.  There wasn’t much change at all with the shimmering or dewy primer, and they both performed pretty poorly over the color correcting one.  I was actually expecting the dewy primer to be a hot mess, since the Ampoule Moisture cushion was so slide-y, so that was a pleasant surprise.

There’s an infographic of all 100 Innisfree My Cushion case colors on this blog post by Jessica Liani.  You can buy a smaller selection of cases in a number of places, including Jolse for about $7, Cosmetic-Love for about $8, and Beauty Box Korea for about $7.50.  You can buy from a larger selection from KoreaDepart for about $7 (just scroll down to find a list of other cases – they are categorized by main color).  They’re available other spots as well.

As for the cushion refills themselves, you can purchase them on Koreadepart for about $12, Jolse for about $8, TesterKorea for $10, and Cosmetic-Love for $12, among others.