Like my other female relatives, I have had the good luck to receive long, fine eyelashes.  Unlike my other female relatives, mine are not particularly dark or visible – they start out blackish at the roots, and then fade away to blonde at the tips, so that they look stubbier than they actually are.  In order to compensate for the ridiculous shading that nature has given me, I seldom leave the house without wearing mascara.  Regardless of what you are looking for in a mascara – should it be black and bold? Brown and natural? An interesting and funky color?  – there are a few things that everyone wants:  it should stay well on the lashes without irritating the eye, it should apply without a ton of effort, and it should be reasonably priced.  Everything else is individual.

Now, since my lashes are thin and fine, and they also tend to curve away from my eye, I have never actually used an eyelash curler. I’ve also never had my lashes permed, or gotten eyelash extensions, so I can’t really speak to how mascara will affect those things.  What I can do, though, is go through a few different types of mascara with you and tell you what I think about them, and whether I’m likely to repurchase them in the future. 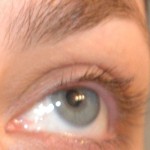 Here’s a picture of my eye.  I’m not wearing any mascara here.  In this picture, like all of the other pictures in this post, I am not wearing any base or concealer or anything at all.  (You can tell because of the ridiculous dark circles I’m sporting.)  I figure that wearing any eye makeup might distract from the pictures of the actual mascara.   I have also, in the interests of showing exactly the results I get, refrained from using an eyelash comb after I apply the mascara.

The first mascara I’ll show you is MakeupForEver’s Smoky Extravagant Mascara.  The first thing I thought when I started using this was “Hot damn, this brush is nigh-unusable!”

Look at it.  That brush is basically bigger than my whole eye.  How is this supposed to promote precision product usage?  Answer: it isn’t.   In theory, the tapered wand allows you the versatility of two wands – a big thick wand to add volume and curl to your lashes, and then a tiny little wand so you can pick out individual lashes that need attention. 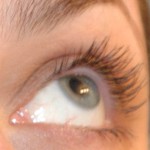 Now, this picture isn’t phenomenal, but if you look towards the outer corner of my eyes you can see that I had some trouble getting an even coat of mascara on the outside lashes without putting too much product on the lashes in the middle of my eye.  I blame the weirdness of the brush, really.  I found it very hard to work with.  It’s also way too big to work comfortably on your lower lashes unless you’re going to use the point of the wand, which I dislike doing.  It came off pretty easily with point makeup remover.

You can purchase this product for $24 from Sephora and many other retailers in the US.

Next is Lancome’s Hypnose Star. This brush is exactly the same style as the MUFE mascara, but a little smaller.  It’s still kind of awkward to work with, especially for the finer lashes on the inner and outer corners of the eye. 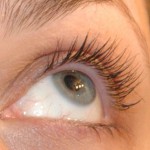 So this product is a pretty decent black mascara, and does a nice enough job coloring the lashes if yours are long but light like mine, but it does kind of clump a little and it doesn’t add any volume at all, really.  It came off fairly easily with point makeup remover.

This mascara costs $28.50 at Sephora and many other retailers in the US.  I wouldn’t bother purchasing it personally.

Then comes Clinique’s High Impact Mascara.  This mascara has a straight wand, no curves, which makes it a little more user-friendly for me (I don’t have to worry about accidentally poking my eyelid or my eyebrow or my eye itself with a section of wand that is unexpectedly fatter than the rest), and you can maneuver the brush at a number of different angles to make sure you get every lash. 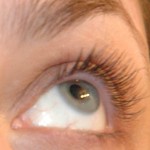 This mascara was by far the ‘lightest’ of all of them – it barely felt like I was wearing anything, so if you’re the sort of person that’s really sensitive to texture in your cosmetic products you may want to consider this.  It’s not as dark as the Lancome but does just as good a job of coloring the lashes – but, again, doesn’t really add any volume (or length, either, for that matter).  It’s perfect for an everyday natural look.  It came off very easily with point makeup remover.

Then A’Pieu Full of Nature Mascara. This wand is, if it’s even possible, even straighter than the Clinique mascara.  It isn’t tapered at the end at all.  A’Pieu isn’t having any of your no-sharp-corners crap. 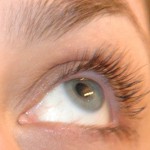 This mascara, I felt, was a little bit tougher than the Clinique – a little harder to remove, and I got the sense that it would stay put a little better – but it seems pretty comparable in terms of performance.  It’s a nice black, but doesn’t really do much in terms of volume or length.

A’Pieu is a Korean brand.  You can purchase this mascara for 2800 won from TesterKorea, or you can probably also get it for a similar price from any other Korean e-tailer.  Seriously. That price is not a joke. It is LITERALLY almost $3.  So if you’re thinking “straight brush, nothing super dramatic”, it’s worth the wait to try this one out rather than forking out the cash for the Clinique and finding out you’d rather try another style instead.

The next type of mascara is DiorShow Extase.  This wand is kind of interesting – like four little stumpy balls all strung together.  The idea is that the longer bristles will add length and the short bristles will deposit enough product to coat each lash for volume – kind of like a tag team effect. 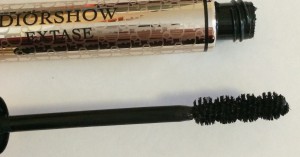 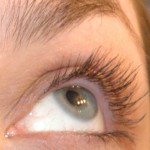 This mascara costs $28.50 and is my favorite of the American mascaras.  It does a good job coating the lashes and coloring them without  clumping them together weirdly, it gives a little bit of length and the illusion of thicker lashes (but again, just a little).  It’s a little harder to remove than the other Western mascaras but does come off with point makeup remover.

Kiss Me Heroine Make Mascara comes in two formulations: Volume and Curl, and Length and Curl.   The Length and Curl mascara has a curved wand, which in theory will add some curve to your lashes and wing them out to create a wider eye look.   The Volume and Curl is a straight wand type, with a little bit of taper.

They both have brushes that are small enough to be used comfortably on the lower lash line.

Both are a very dark black.  The Long and Curl formula tends to do a little better in the ‘curl’ department for me (probably thanks to the wand shape), although you have to be more careful about the lash tips getting stuck together. The Volume and Curl does a better job of separating the lashes out.  They are both exceptionally waterproof (I’ve cried in them and nothing happened) – but they do make your lashes feel a little stiff. They also ‘set’ fairly quickly, so it’s harder to build multiple coats with them like you can with most of the other mascaras on this list.

Both types of mascara are stubborn to remove – although I attempted to use SecretKey’s Oil-Free Lip & Eye Remover and Lancome’s Effacil eye makeup remover, the only thing that really budged these mascaras was Banila Co’s Clean It Zero.

I purchased both types of Kiss Me Heroine Make mascara on Amazon for around $14 each, although you can also import them directly from Japan.

So, long story short:  You may notice that all these ‘after’ mascara pictures look pretty much the same.  You’re not wrong there.  The real difference in mascara value, to me at least, is whether I’m comfortable using the product, how it feels when it’s on, and how well I can trust it to stay put or go away when I want it to.   If it’s got a brush that I poke my eye with every time, it doesn’t matter whether the mascara itself is phenomenal, since I can’t use the brush.   Since my priorities include a fairly small brush, a really pigmented formula, and not having to worry about anything smearing, my top three are the two Kiss Me Heroine Make mascaras and DiorShow Extase.  I use the DiorShow when I have a big event where I want to be able to layer the mascara for a really dramatic look, and the Heroine Make for every day, since I know I’ll never have to worry about it ending up under my eyes.