One of the complaints I hear most often about lip tints is that they aren’t suitable for dry lips – and that means either people whose lips are dry naturally, or those who are living in climates that have extremely dry weather at at least one point.  Regular tints, which in Korea are called “water tints” (as opposed to ‘milky tints’, or the American liquid lipstick), can be drying on the lips in general, can aggravate existing lip skin problems, and, can often emphasize issues in lip condition (dryness, flaking, or cracking).  Using a milky tint can alleviate some of those problems, but what happens when you don’t like the look of a milky tint?

A newish group of products has appeared on the market that could theoretically address some of these issues: oil tints. I’ve been able to get my hands on three examples, so let’s see how they stack up! 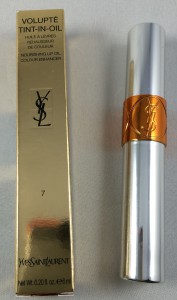 The packaging is really pretty and luxe, with a color band around the middle to indicate which color you’re getting.  I got No. 7 Crush Me Orange.

This formula is SUPER sticky, and very ‘squishy’ feeling on the lips. It’s been really cold, dry, and windy here, and I’ve worn this product outside on walks during the day.  It’s definitely a lot more moisturizing and protective than any water tint I’ve ever used (and actually outperforms a number of the milky tints I’ve tried as well).

My favorite part of this product is the applicator:

Seriously, it’s shaped so you can use it right on your cupid’s bow. How helpful is that? I legitimately hope that whoever came up with that idea got a HUGE raise.

The tint itself looks super pigmented on the applicator, right?  But it’s not that pigmented when you put it on.  Here’s a swatch on my wrist: 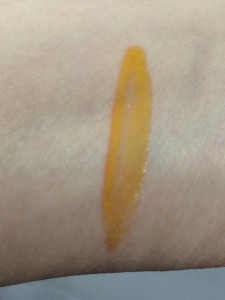 The color seems to adjust on your lips – maybe it’s a pH thing, or a skin chemistry thing. I don’t know why.  Everything ends up pinker on my lips.  Here’s what this tint looks like after a few minutes.

Like I said – not super pigmented.  The staying power isn’t phenomenal either – I wore this for about an hour and a half, doing nothing more than drinking water, and it was gone.  It does leave a tint behind, but that’s not very strong either.

One of the funnier parts of this product is the scent:  I was doing a test run with this product at Nordstrom’s and when the salesperson applied it, she turned to me and said “This smells just like those sour gummy eggs!”

(Here is what she was talking about, if you are curious. She is totally not wrong.)

This tint is for you if:

The YSL tint can be purchased at Sephora, Nordstrom’s, Bloomingdale’s, all sorts of other North American malls, and at YSL’s online store.

This product comes in a fairly standard water tint-type package, with a doe foot applicator.  The idea behind it is that if you want a really pigmented look, you shake the product all up and apply it, but if you want something sheerer (or to add a glossy top coat) you use less of the pigment and more of the oil.

Here’s what the tint looks like on my lips at full strength.  I dipped the applicator one time, and this is only the amount of product that came out at that point (although it was enough for two coats).  This product does have a tendency to feather a little along the lip lines, so I would advise you to use a reverse lip liner (or to watch your lip line like a hawk while you’re applying.  I clearly didn’t here).

Unfortunately, like the YSL, the fact that this tint is oil-based means its staying power isn’t as phenomenal either.  A quick lick of my lips and some tissue, and this is the remaining stain.

Even if I don’t do the “lick your lips and swipe with some tissue” business, about an hour after application of the tint, the shine from the oil is gone. After three hours, even the tint has started to fade and I can see where it starts to settle in my lip lines when I smile.

Theoretically, you can reapply just the oil part of the tint in order to keep the shine going (and keep your lips moisturized) – but that can be kind of awkward.  If you look at the packaging photos, you can see that the doefoot applicator is actually touching the tint at the bottom of the bottle, so you’ll have to remove the applicator, try to get as much of the tint off as possible by scraping it against the inside of the bottle (or with a tissue, which seems like a waste of product), wait for the bottle to settle again if you’ve knocked it around, and then get to the oil. It almost seems like more work than it’s worth, given how little staying power the oil actually has.

You can get rid of the stain with any point makeup remover you like fairly easily.  Or you can just step into the shower.

This product has a fake fruity sort of scent, and a slightly bitter taste.  It’s more moisturizing than a regular water tint – but that’s not really saying a whole lot.  It won’t do your chapped or damaged lips any harm, but it probably won’t do them much good either, and it won’t protect them outside unless you’re only walking across the block or something.

Finally, there’s the It’s Skin Babyface Oil Drop Tint.  Frankly, this product is so similar to the Holika Holika that there really isn’t a whole lot else to talk about other than providing you with some pictures so you can see how it looks.

Here’s how it looked on me, full swipe:

After wear and blotting:

The main differences between these two products are the color selections (Holika Holika has 5 colors to choose from: Bloody Vampire, Bloody Red, Bloody Orange, Bloody Pink, and Bloody Berry, and It’s Skin only has 3: Cherry, Strawberry, and Orange) and the size:  the Holika Holika tint is listed as being 4mL of product, and the It’s Skin is listed at 9mL.

Either of these two tints could work for you if:

The It’s Skin tint can be purchased at Jolse, KoreaDepart, TesterKorea, eBay, and Amazon.

To wind up, here is another set of swatches of the products.