My roommate and I are big fans of survival horror.  My roommate is a big fan of Tom Hiddleston. These two added up means we went to see a 7pm IMAX showing of the newly released Crimson Peak. (Spoilers ahead!)

Crimson Peak is billed as a gothic horror, which it absolutely is.  Unfortunately, a lot of the trailers and advertisements for the movie seem to be portraying it as more of a jump-scare movie than it actually is.  There are a few good jumpscares in the movie, but only a few and they all happen within what I think of as the middle section of the movie.  If you’re looking for a film like Ju-On where crap is popping out at you all the time, this is not your movie, my friend.   If you want something more like Pan’s Labyrinth meets Ringu meets the Orphanage, this is going to be more up your alley.

The movie starts slowly and just keeps building, pretty much straight to the end. The interesting thing about this film is that, while the ghosts are obviously important and plot-relevant and stuff, they aren’t actually really the focal point of the film for me.  The real horror is found in the characters and the story and exactly how messed up people are and how they mess up the people around them, and their lives.  The ghosts are really only a means to an end – they serve to showcase the awful things that have come before our protagonist ever even shows up. 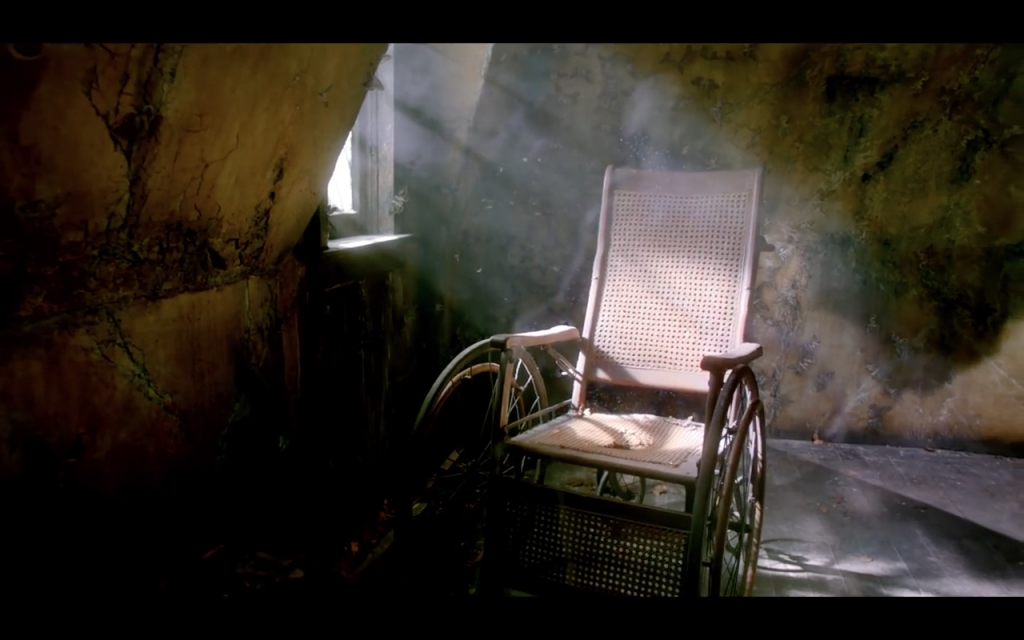 This film does a number of things really, really well.  The first is, in my opinion, a really well thought out use of visceral physical injury depictions.  My roommate and I cringed several times during the film, which is not generally a reaction that you see from us.  There’s something about the way they delivered these scenes that really makes you think about how being injured like that would feel, which is missing in a lot of modern horror.

I also thought that the film used an interesting method of portraying the poor dead folks that keep sticking around Crimson Peak.  There are really two types of ghosts in this film, appearance-wise: mysterious wispy ghosts with nasty underneath who kind of float and sneak around; and what look like slightly-more-than-skeletons dipped in colored latex.  The difference between which type of apparition you get seems to be the reasoning behind why the ghost stuck around – if horrible things happened to them and they’re bent on revenge, you get a nasty-looking ghost.  If they stuck around for love (even if horrible things happened to them), you get a ghost that may be a little bit yucky underneath, but has a more diaphanous, floaty appearance.  I liked the juxtaposition.  My roommate disagreed. 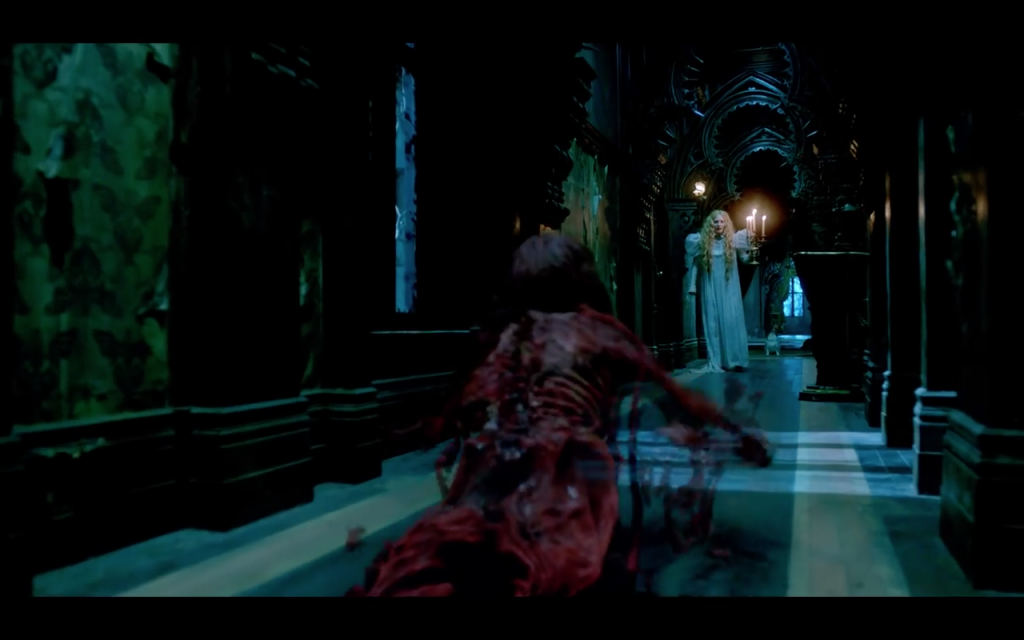 The environment in this movie is utterly phenomenal.  We move from a vibrant New York to an England that isn’t monochromatic but is kind of dull, and into a house (for lack of a better word, really) that is literally falling down in spots.  There’s a hole in the ceiling where leaves and snow fall in whenever weather happens, the elevator in the house is rusty and screechy, everything creaks, the wind whistles through the house in a delightfully eerie way, and red clay oozes between the floorboards because the house is sinking into the ground it’s standing on. I mean, what’s not to love? Let’s move in right away. Once you move into the house, the lights dim, nothing is ever really warm, and the bright colors fade away – and at the end the color scheme is black and white and red, with the exception of our protagonist’s hair and face.  The setting is perfect to add all those little house sounds that aren’t frightening at all when you’re in a safe place but become disturbing when you’re somewhere you can’t relax. 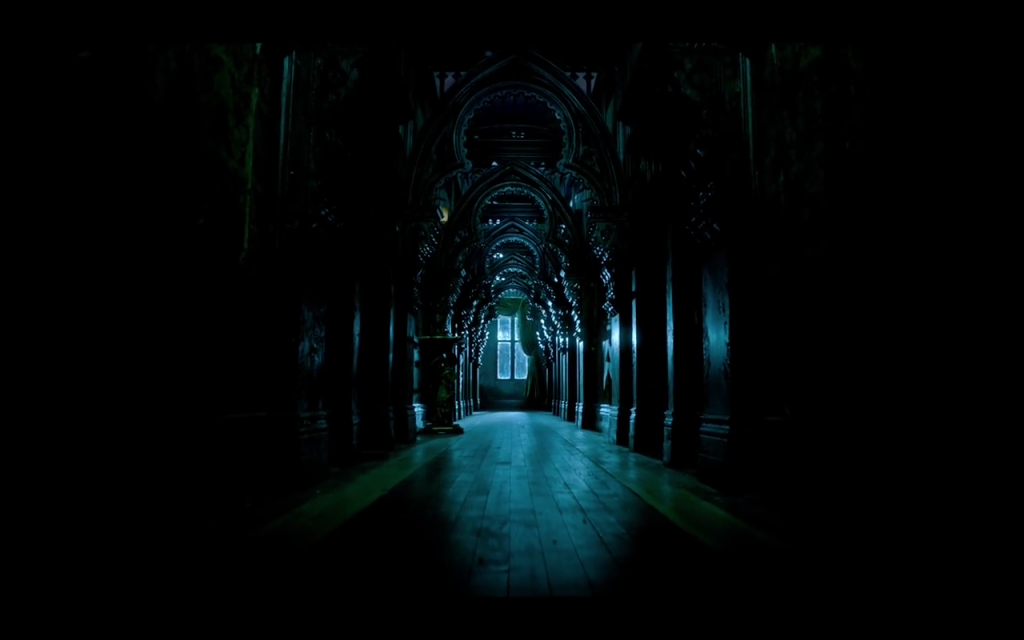 This movie uses several common Gothic Horror tropes – the Parental Marriage Veto, I Should Write A Book About This, Villainous Incest, Villainous Crush, Defecting for Love,  Snowed-In, the Eerie Pale-Skinned Brunette, and a number of others.  On the other hand, it doesn’t get too tropey – at the end of the day our protagonist has to save the man who showed up intending to save her.  We never see either of the female leads undressed, but we see Tom Hiddleston without pants on (from behind).  The ghosts are terrifying but they never actually hurt anyone. 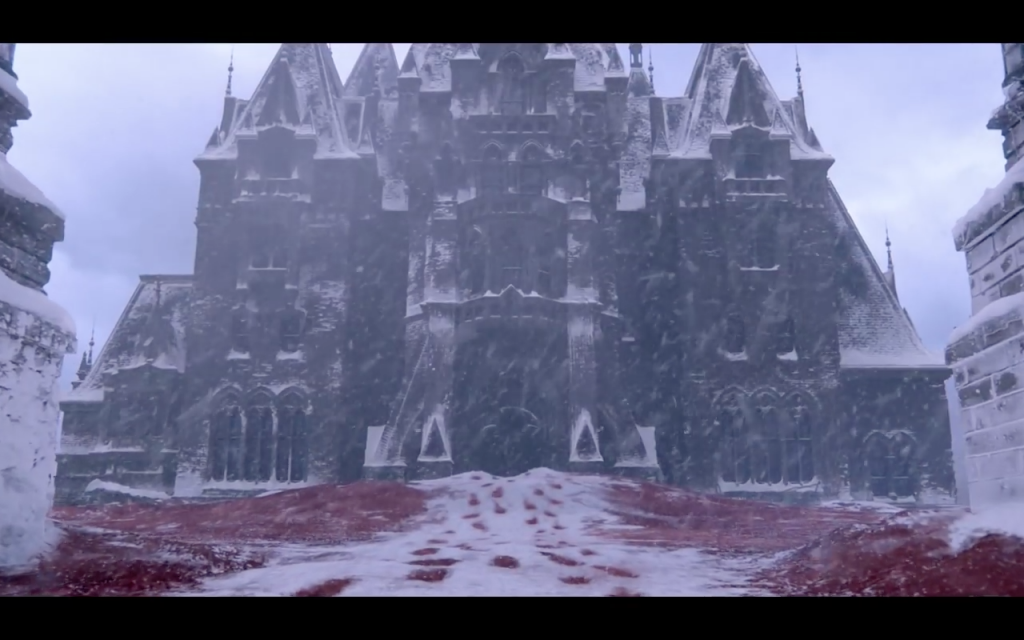 Crimson Peak is playing in theaters now.  I saw it in IMAX, but I don’t think that you have to in order to get a good experience out of the film.  While I didn’t see the film that I thought I was going to based on the trailer, nevertheless I thought this film was phenomenal and I heartily recommend it.