After I found a base routine that worked pretty well, I started testing things out for a couple reasons: one, because a baseline routine is just that and there’s always room for improvement; two, it’s fun testing and playing with new things; and three, even if I’ve got a skincare routine down that I like there’s always makeup to play with as well!

I’ve gone through phases of being more interested in one thing than another, and makeup, skincare, and perfume have all taken their turns in the spotlight of my heart.  Unfortunately, all that time in the spotlight correlates to a lot of stuff on my desk as well, which is what brings me to the point of this post.

I have a lot of stuff.

Why is this a problem?

It was cluttering up my desk.

It got to the point where putting on makeup in the morning was becoming more stressful than fun, I was always struggling to remember where I had put the things that I was working on blog posts about, and there were sample packets all over the place.  It was hard to keep track of everything, and it felt like a lot of what I had was just going to waste – not even necessarily because I didn’t want to use it, but because I either couldn’t find it or didn’t remember that I had it at all.

So how to fix it?

One of the things I struggle with, as a self-labeled cheapskate, is the incredible guilt of throwing something out or giving it away.  I don’t like getting rid of things that I paid good money for – I worked hard for that money, you know?  And I hate having to admit that I spent it on something that wasn’t worth it, or that turned out to not work out for me for one reason or another.  I can alleviate a little of that guilt by giving good products that just aren’t for me to other folks, but there’s that little sense of “paycheck wasted” that just makes the process of stash organization really frustrating and uncomfortable for me.

But equally as uncomfortable is the idea that I might buy something only to turn around and find out that I’ve already got it and it didn’t work for me, and I’ve just forgotten about that because the product itself got shoved into a box somewhere I don’t look often.  Or that I’ll spend lots of time working on setting up a post for this blog only to not be able to finish it because I’ve set something somewhere and forgotten about it, and then I need pictures of it or to translate the ingredients listed on the box and I’ve lost that.

In order to fix this issue, three things need to happen.  First, I need to organize everything, so that I know where my stuff is.  Second, I need to go through and pull out all the stuff that either doesn’t work at all, doesn’t work right now, or that I’ve got extras of. And third, I need to set up a way to make sure that i keep to a budget that isn’t ridiculous.

Before I can weed out what I don’t want, don’t need, or can’t use, first I need to sort through everything and figure out what I’ve got.   So I pulled everything off my desk, out of boxes, and out of my blog stash spots. 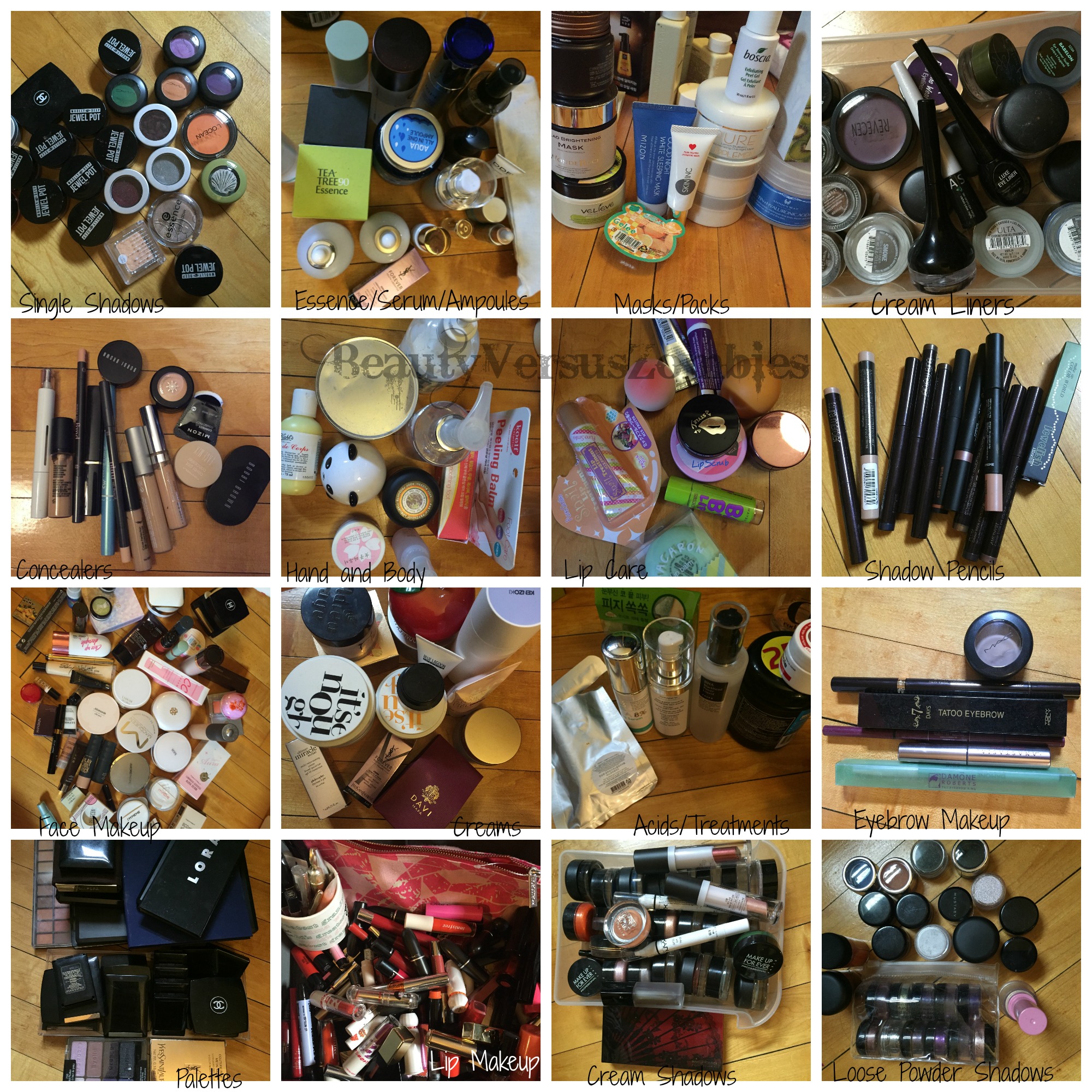 There was so much more than I thought I owned.  The first thing I did was throw out everything that had dried up or stopped working correctly.

The next step was going through and figuring out exactly what I had, and what I wanted to keep – then figuring out where I was going to store it so that I could keep track of everything.

In the case of makeup, that meant taking swatches of everything. 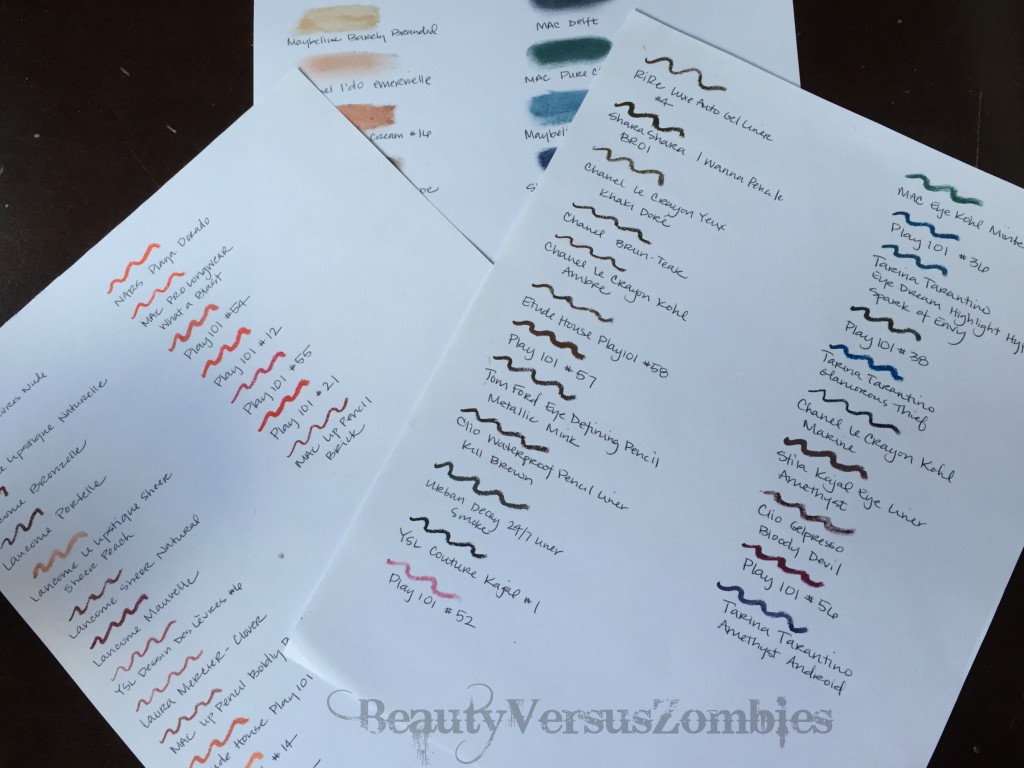 There were some items that I had that were not exact duplicates of each other, but for the rest, if I had two items that were the same color, I needed to find which one of them that had a formula I liked better and get rid of the others.   For some products, like brow pens or pencils, this wasn’t a difficult task; for other products it was somewhat more daunting. Those travails I’ll document separately in other stash shopping posts.

Skincare was a little more difficult.  I had to separate things out into multiple categories:  things that flat out don’t work for me, things that are kind of “meh” but that I might want to play with later on, things that work for me but aren’t right for this season (too moisturizing for summer/not moisturizing enough for winter, etc), and things that count as part of my routine. Other things that take up space as clutter on my desk, like empty boxes that I need to translate ingredient lists, get stacked together as well, and edited to make sure that I don’t have boxes that belong to products I’ve already gotten rid of.

One medium-sized box of assorted skincare products went to my roommate, who brought them to work and let folks just take whatever they wanted.  (Sorry, I didn’t get a picture before it left the house.)  That took care of most of the skincare stuff, since I’m pretty decent about throwing skincare away as it expires.

When I went through my makeup, I started accumulating a similar stash of that for her to take to her coworkers as well.  Here’s how it started, with just a one-through culling, before any serious editing happened. 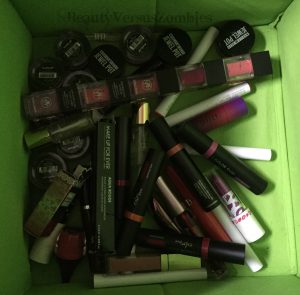 Here’s what went straight into the garbage.  I don’t keep as sharp an eye on my makeup expiration dates as I do with my skincare, so anything that I thought might be expired I threw away rather than rehoming.  I feel like it’s safer that way. I’ve always been told that powder products take a really long time to expire, so the only powder things I immediately binned were old loose eyeshadows. 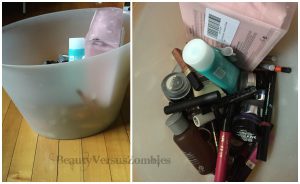 In stash organization, it’s not just editing down what you’ve already got (although obviously for me that’s a large part of it) but being picky about what you put in.

First, the Purgatory of Meh.  I did a post on it for skincare a while back.  I made one for makeup too.  In the Purgatory will go everything that I am kind of “blah” about.  If I use a product, I will take it out of the Purgatory.  Every six months from now on, everything that is in the Purgatory is going to be disposed of, whether that means giving it to someone or throwing it away.  That will keep things from being forgotten until they expire, which is wasteful.

Second, a spreadsheet like Snow White and the Asian Pear, where I can track all of the products I’ve purchased and tried. This way, if I try something and for whatever reason get rid of it without doing anything on the blog or social media about it, I’ll still have a record of it and so I won’t buy it again (unless I really love it).

Third, a budget (gasp how adult). It’s easy to overspend on blogging without realizing it, and so from now on I’m going to try and set a limit on how much I can spend in a month.  It may take me a bit to figure out what that number is;  I can say that the past month or so I’ve spent enough that I’m really only going to be purchasing gifts for other folks for at least a little while. But I’ve got the basics down:  there will be a number.  If I go over that number in the middle of buying something, it comes out of the next month’s budget.  If there is no money in the month’s budget left I cannot even start shopping – all I can do is write down interesting products in the spreadsheet so that I remember them next time there is money in the budget.

A permanently clean and pleasant workspace, where everything is in its place, I can find anything I need, and it’s easy to keep track of what I need, what I want.  Plus an editing schedule that keeps me on track (and keeps me from wasting products instead of giving them away).

So, how did my space turn out?

Here’s my desk, where I keep all the things that I might use every day. 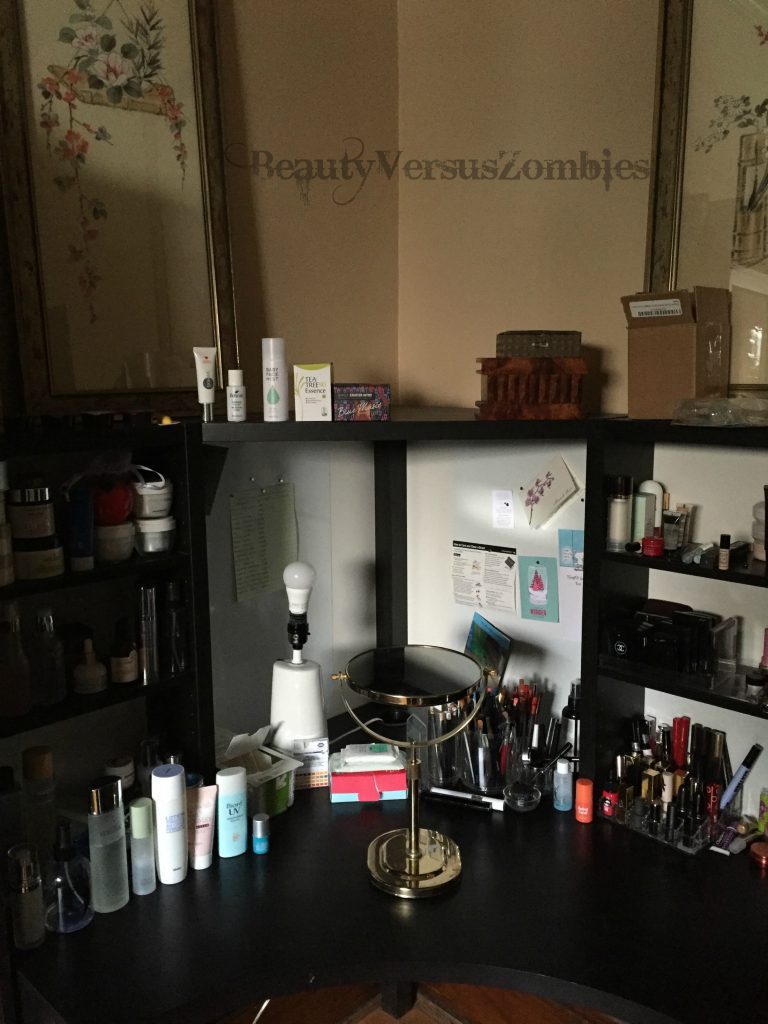 And here’s the storage area next to it.  Each compartment is clearly labeled and everything fits into a compartment (with the exception of my jewelry box, which is the one thing I haven’t replaced since it was a gift from my little sister). 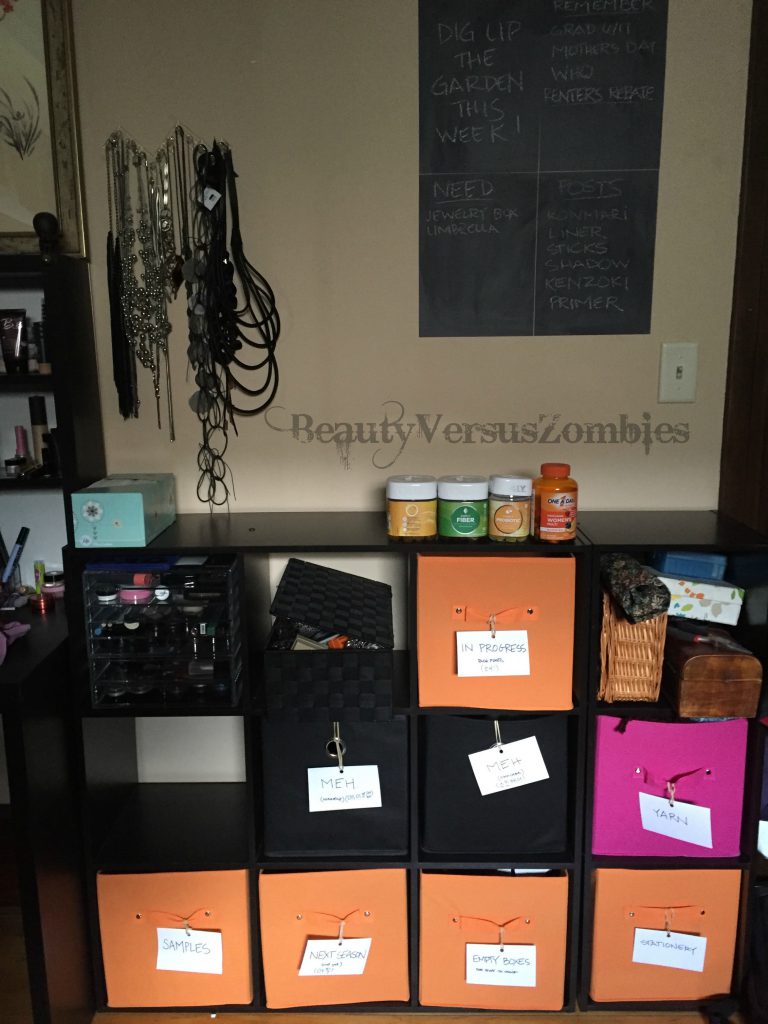 In case you can’t read them well from the pictures, here is how I sorted the cubes, from top to bottom and left to right:

Row 2: An empty cube (I haven’t decided what to put here yet – maybe tools), the two Purgatories of Meh ( makeup first, then skincare), and all my knitting yarn.

Row 3: Samples (all sorted into plastic baggies by routine step), stuff that I like that I can’t use this season but will once the seasons change, empty boxes for things that I’m using, and all my stationary (cards, notebooks, post-its, etc).

Cleaning everything out was extremely stressful and a really long process for me – especially since I bit the bullet altogether and cleaned out my bookshelves and my craft supplies all at the same time.  I haven’t done my wardrobe yet, but that’s the next thing on my list.  Going through this process has really made me more aware of how easy it is to over-consume, and so hopefully setting myself a budget and having a system where I can more easily look and see what I already have will prevent that in the future, while still letting me play with new products and try things out to share with you all.