So, over the past few months, as I’ve gotten into the swing of the Asian Beauty routine, I’ve been the recipient of WAY too many things that I can put on my face.  I haven’t had time to review all the beauty products I’ve gotten in – and some of them are awesome!

I know that, especially when buying from another country (since shipping is expensive, waiting is torture, and returns are often more hassle than they’re worth), it’s nice to have reference points when you’re shopping, so I’ll do my best as I write this post over the next few days to talk about some of the stuff I’ve been getting.  Almost all of the stuff I’m testing is from Korea, but for comparison’s sake I’ve put in products from the US as well.

The first swatch is the Royal Nature Pantone Shadeliner that I got in the K-Style 2 Memebox. This is a super vivid shade and I don’t think I’m confident enough to wear it out of the house with a straight face – and I certainly couldn’t wear it to work.  The liner itself is soft – it reminds me in texture of the Urban Decay 24/7 pencils.  I’d prefer it to be a little bit harder – I feel like I’m putting on way more product than I actually need, since it’s so pigmented.  I’ve had it on for the past 6 hours or so and there’s been no irritation, smudging, or flaking.  When I went to wash the swatch off of my arm, it totally didn’t budge. At all.

RiRe’s Luxe Mirror Liner in black, also from the K-Style 2 Memebox, was next.  This is a liquid liner.  The brush is really thin, which allows for a nice fine line.  It’s a good, dark black, and like the Royal Nature Pantone Shadeliner, it didn’t want to wash off with water or makeup remover – it took a good scrub to take it off.  The formula is neither too thick nor too thin.  I’m glad I’ve got this.

The next series of liners are comparison swatches for a dual product: the it’s Skin Babyface Young Girl Gel Liner, which is a purple liner and a black liner all in one tiny, adorable pot.  This is from the Wakeup Makeup Memebox, and like I said in that unboxing post, the purple liner was totally dried out when I received it.   I’ve sent the folks at Memebox an email about the problem and we’ll see what happens there.   In the meantime, I tried to revive the eyeliner the best way I know how – I took a big mug full of hot water, put the eyeliner pot in a little plastic baggie, and then let the pot soak in the hot water until it cooled down.  It loosened things up enough that the liner was usable, although it wasn’t in great shape and it would take a lot to get a good look with it.

I really like the color of this liner – it’s a nice bright purple with a little shimmer in it. I don’t know that I can really assess the quality since it was so hard to work with after having dried out.  I had a similar problem with the Ulta gel liner that I swatched – but in fairness to the Ulta gel, I’ve had that for over two years.

The smoothest product of all the purples I swatched is MAC’s paint pot in “Half Wild”. (Sorry, it’s mislabeled in the picture.) Not technically an eyeliner but a cream eyeshadow, MAC’s paint pots are smooth and creamy and easy to apply.

The two eyeliners from Stila that I swatched are, frankly, pretty forgettable – I almost forgot I had the convertible eye color and actually did forget that I had the kajal liner. All that’s really important about them is that they are NOT dupes for the Babyface liner. Trina Tarantino’s liner, on the other hand, is fabulous – goes on smoothly, is nice and creamy (but not TOO soft), and has an awesome color.  It’s not a dupe for the It’s Skin color, though – it’s a lot cooler in tone.

The It’s Skin black eyeliner, on the other hand, looks almost exactly the same as MAC’s Blacktrack gel eyeliner and actually stays on better.  It must have been a little bit dried out when I got it because after I used the hot water trick it went on the brush and spread onto my skin really beautifully.  If the purple color had been new and had worked as well, I would have been so happy with this product. 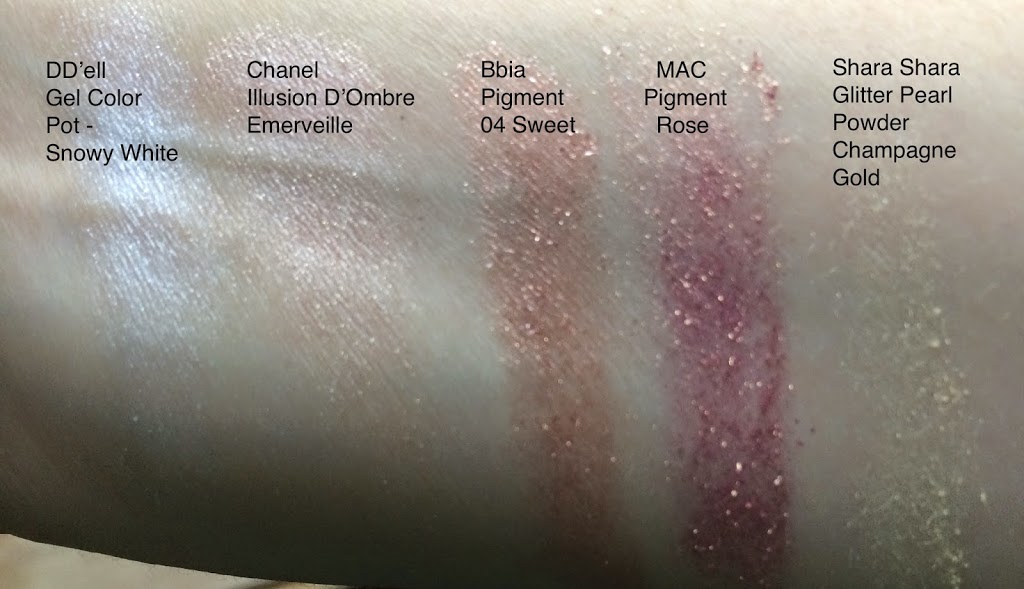 The first product swatched here is DD’ell’s Gel Color Pot in Snowy White.  I got it in the No Makeup Makeup Memebox.  Because it’s got a similar sort of look, I’ve swatched it next to Chanel’s Illusion D’Ombre in Emerveille.  The Illusion D’Ombres are a cream-to-powder product, and the DD’ell Pot is more of just a spongey cream, but they apply almost the same way.  I think I may actually like the texture of the DD’ell pot better, which is awesome because the price difference is extreme.

The third product swatched is the Bbia pigment that was in the first K-Style box.  I didn’t do an unboxing for that one because there were already so many good ones on the internet – I just gloated over my prizes quietly by myself.  The Bbia pigment is basically chunky (and not-so-chunky) glitter, so I swatched it in comparison with one of MAC’s pigments.  One of the only ones that I own is Rose, so that’s what I used. The Bbia actually seems to go on a little less patchy than the MAC.  Both of them will come with extreme fallout if you don’t use a primer, though. There’s nothing there to adhere them to your skin.  You can leave the pigment as it is or sheer it out, and it looks nice either way.

The final product in the picture is Shara Shara’s Glitter Pearl Powder in Champagne Gold. It’s more of a glitter than the DD’ell Color Pot.  It comes with a sponge applicator in the tip of the package that you can use to apply the product more precisely.  The powder is really easy to sheer out and won’t make a whole lot of fallout, but you should use a primer with it anyway so that it doesn’t wear away.  It’s a good color that looks nice on my NC20 skin.

My last post had a large number of lip product swatches, but I didn’t have a chance to get some that weren’t comparable to the Innisfree colors, so here they are: 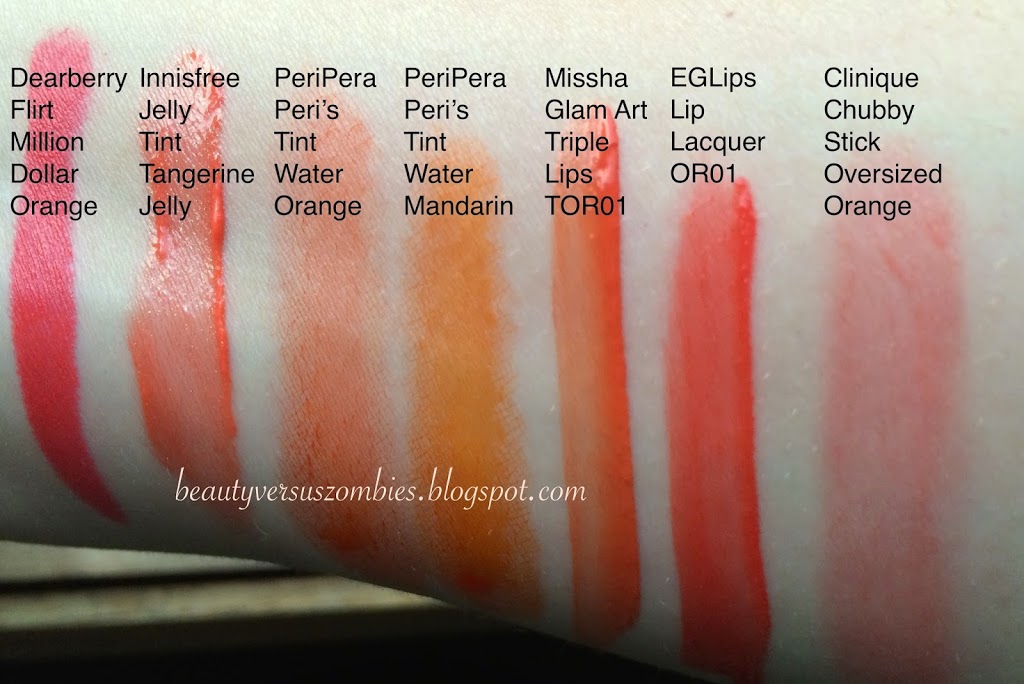 The Dearberry Flirt lipstick in Million Dollar Orange was one of the products in Memebox’s Orange Box.  It’s got great coverage, no weird smells or tastes.  It’s not as glossy as the Innisfree Creammellow lipsticks.

PeriPera’s Peri’s Tint Water in Orange Juice and Mandarin Juice are, as the name suggests, water tints, which means that they don’t have the creamy look that the Innisfree Jelly Tint (or any ‘milky tint’) does.  The colors are actually the opposite of what I would have expected based on their names, but that’s neither here nor there.  My issue with these products is mostly that they have a really, really bitter taste.

Missha’s Glam Art Triple Lips in TOR01 is, according to Missha, infused with triple technology so that you can wear it three ways – as a tint (using just a little of the product), a gloss (a little more of the product for a high shine finish), and as a lipstick (using more of the product for a vivid color).  I think this is a great color, but this stuff has a taste/smell that I can only describe as “chemically infused play-dough”.  I don’t wear it.  (Luckily for me, I got it on sale.)

EGLips Lip Lacquer was in the K-Style 2 Memebox. It’s a really bright product but you can sheer it out pretty easily.  I was able to create a pretty gradient lip in about 20 seconds.  This product has a sweet scent which kind of reminds me of Laffy Taffy.  It doesn’t have much of a taste at all.  It feels a little sticky when you first put it on, but that wears away fast.

The last is Clinique’s Chubby Stick in Oversized Orange, just for comparison.  The Chubby Stick is a lot sheerer than any of the products that are here.  I swiped the product back and forth about 3 times for this swatch.